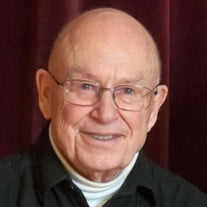 Dr. Ronald Wayne Taintor, 96, of Silver Bay and formerly of Marshall, Minnesota, passed away on January 8, 2021 after suffering a stroke 4 weeks earlier. A public Graveside Service will be held at 10:30 a.m. Saturday, May 22, 2021, at the Marshall Cemetery in Marshall, Minnesota. Wayne was born on February 8, 1924 to James and Jewel (Haugen) Taintor in Grafton, ND. After graduating from the Walsh County Agricultural School in 1942, he went on to study science for 1 year at the University of North Dakota. He joined the Army in 1943 and served until he was honorably discharged in 1946. Wayne then returned to UND to finish his pre-med studies and the first two years of his medical school training. After getting his Bachelor of Science in Medicine degree from UND, he enrolled in the University of Louisville for the last two years of medical school. Following a year-long internship in St. Paul, MN, Wayne returned to Louisville for the first two years of his surgery training. He finished his surgery training in New York City at the VA Hospital in Manhattan. In 1950 Wayne married Berget Torkelson and started a family. In 1957, they moved from New Jersey to Marshall, MN where he practiced medicine for the next 29 years. “Doc” Taintor was a faithful member of Christ United Presbyterian Church in Marshall, MN where he was active in church life - singing in the choir for many years, serving as elder on the church session, and enjoying many potlucks in the church basement. He was also active in Boy Scouts. He served as assistant scoutmaster for many years during which he taught many scouts the basics of first aid and public health. Wayne bravely went on dozens of camping trips with all his sons, including two trips into the Boundary Waters Canoe Area Wilderness and a World Jamboree in Japan. Wayne loved his family, including those he invited to be a part of it, the international students sponsored by AFS and Rotary International. He attended his family's innumerable concerts, plays, dance recitals, and athletic events. He took them on trips across the country and around the world. After retiring in 1986, he spent time volunteering with Prairie Home Hospice and the American Cancer Society as well as the History Center at Southwest State University. He became involved with the Wellness Clinic at Southwest State University as a consultant. He also spent many hours doing research on family history for the Taintor family as well as the Torkelson (his wife’s) family. He retained an adventurous spirit into his later years, going skiing twice with several grandchildren in Montana while in his late 70’s and early 80’s, and even became the oldest person to ever ride down the Alpine Slide at the Lutsen Ski Resort after he turned 90! In 2013, Wayne moved to Silver Bay. There he continued his 63-year involvement with Rotary and became very involved with the United Protestant Church in Silver Bay. In addition, he became a member of the North Shore Voices Choir. He was the oldest member of the choir and adored by all its members. He also traveled to Alaska twice to visit grandchildren and great-grandchildren who live there. He was preceded in death by his parents as well as his wife, Berget. He is survived by his sister, Merilynn Liebelt, of Beulah, ND; 4 children, Mark (Julie) Taintor, Paul (Mary Jo) Taintor, Sue (Scott) Landon, and Tom (Cindy) Taintor; 13 grandchildren and 13 great-grandchildren, as well as numerous nieces and nephews. A special thanks to the folks at Carefree Living, both past and present, for taking care of our Dad these past almost 6 years. Thanks for all your love and care. Memorials preferred to either: Prairie Home Hospice in Marshall, MN, to the Alzheimer’s Association, or Christ United Presbyterian Church.

Dr. Ronald Wayne Taintor, 96, of Silver Bay and formerly of Marshall, Minnesota, passed away on January 8, 2021 after suffering a stroke 4 weeks earlier. A public Graveside Service will be held at 10:30 a.m. Saturday, May 22, 2021, at the Marshall... View Obituary & Service Information

The family of Dr. Ronald Wayne Taintor created this Life Tributes page to make it easy to share your memories.

Send flowers to the Taintor family.