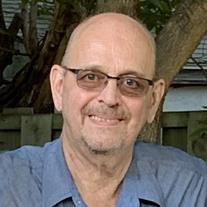 Ronald Warnke, age 70, of Marshall, Minnesota, died peacefully on Saturday, September 7, 2019, at his home in Marshall, Minnesota. A Memorial Celebration of Life will be at 11:00 a.m. Wednesday, September 11, 2019, at First Lutheran Church in Marshall, Minnesota. Visitation will be held from 5:00 – 7:00 p.m. Tuesday, September 10, 2019, at the Hamilton Funeral Home in Marshall. A Prayer Service and time to share stories will begin at 6:30 p.m. Visitation will continue one hour prior to the service, from 10:00 – 11:00 a.m., on Wednesday at the church. Ronald Arden Warnke was born on July 30, 1949, in Marshall, Minnesota, to Arden and Eleanor (LaBrie) Warnke. He attended Marshall public school, graduating in 1967. Ron was proud to serve his country as a Marine during the Vietnam War. He went on to work for Viking Coca-Cola and Versa Vend in Marshall where he was employed for over 30 years. On July 15, 1994, Ron was united in marriage to Debbie (Keplinger) Verschelde at First Lutheran Church in Marshall. The couple made their home in Marshall and shared over 25 years of marriage together and were members of First Lutheran Church. He was a proud member of the Marshall American Legion, Post 113, in Marshall. Ron finished his career with Schwan’s prior to his retirement in 2017. Ron’s enjoyments in life included playing pool, card games, watching all sports, and tending to his well-manicured lawn. He loved to tinker and fix things and always seemed to be building something. Ron was always willing to lend a helping hand and enjoyed visiting with people, often using his great sense of humor to inject one-liners to a conversation. He loved spending time being a special Papa to Deb’s daycare children, as well as his own grandchildren. Ronald Warnke entered his Heavenly home after a brief battle with cancer on September 7, 2019. He reached the age of 70 years, 1 month, and 8 days. Blessed be his memory. Ron is survived by his wife, Debbie Warnke; children, Curt Warnke, Jason (and Kari) Warnke, Lisa (and Brandon) Herold, Sara Terra, Marv (and Sarah) Verschelde; 9 grandchildren; brother, Steve (and Janice) Warnke; sisters, Judie Graffunder, Rosalie Kropp; in-laws; nieces, nephews, other relatives and many friends.

The family of Ronald Arden Warnke created this Life Tributes page to make it easy to share your memories.

Send flowers to the Warnke family.