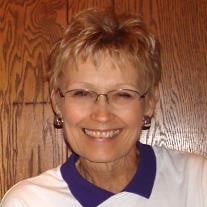 Rosemary Heise, age 68, of Marshall, Minnesota, passed away on Friday, April 15, 2016, at her home in Marshall with family at her side. Memorial Services are 2:00 PM Monday, April 18, 2016, at the Hamilton Funeral Home in Marshall. Reception to follow. Private family interment will be in the Marshall Cemetery. Visitation will be held one hour prior to the service, from 1:00 – 2:00 PM Monday, April 18, 2016, also at Hamilton Funeral Home in Marshall. Clergy Officiating: Rev. Bernie Wing Congregational Hymns: In The Garden / Lord, I Come To You Pianist: Greg Anderson Special Music: Jill Kontz, Soloist Honorary Urn Bearers: Brenda Kaffenbarger, LaVae Anderson, Mick Verdeck, Jesse Verdeck, Ashley Verdeck, Matt Merritt, Quinn Merritt, Merrissa Merritt, Corey Heise, Sandy Culhane, and (from the After Beast Cancer (ABC) group) Kathy Jones, Mary Rademacher, and Mary Jane Striegel Rosemary Heise was born June 5, 1947, in Marshall, Minnesota, to Cornell “Corney” and Bernice “Mickey” (Mickle) Paulson. She attended school at Marshall Public Schools and graduated in 1965. She went on to Willmar VoTec and on October 1, 1966, married her high school sweetheart, Doug. Diagnosed with inflammatory breast cancer in 1993, she spent the following years in some sort of treatment phase, which she was grateful to have. She wanted cancer patients to know it was possible to live, and live well, with cancer. She loved to collect words of wisdom and spirituality and shared them with others with encouragement and sympathy cards. Rosemary, Doug, and their team (the Heise Cream Cones) were very active in the Relay For Life for many years and continued that support for many more years. She was also an original member of the ABC (After Breast Cancer) group. Rosemary was a rather introspective woman who enjoyed quiet activities such as listening to music, reading, Sudoku, crossword, and jigsaw puzzles. She also had an off-beat sense of humor which she felt not everyone shared. But nevertheless, collected and shared comic strips with family and friends she felt would appreciate them. Although appearing quiet, she was friendly and had a way of handling things calmly, but was outgoing and clever around her closest friends. She sends a special thank you to all of those people who made her laugh. She cherished the many dogs in her life and recently spent many enjoyable years with her rescue Shih Tzus, Luna and Holly, who will miss their ‘Mommy’ a lot. Rosemary respected all living creatures (even many bugs). She was a supporter of humane and pet rescue groups, the National Wildlife Federation, and World Wildlife Federation. Rosemary Heise passed away peacefully on Friday, April 15, 2016, at the age of 68 years, 10 months, and 10 days. Blessed be her memory. In addition to her husband, Doug, she is survived by her brother, Mike (and Joyce) Paulson of Currie; sister, Terry (and Rodger) Malikowski of Willmar; nieces, Brenda (and John) Kaffenbarger of Tyler and their children, LaVae (and Greg) Anderson of Marshall and their children. She also leaves behind many dear friends who were part of her life for over 40 years. Rosemary is preceded in death by her parents, Corney and Mickey Paulson. Memorials are preferred to Prairie Home Hospice in Marshall or the Humane Society of Lyon County (PO Box 541, Marshall, MN). For those who were touched by her life, please honor her by sharing those memories with a family member or friend. “Help us to be always hopeful gardeners of the spirit, who know that without darkness, nothing comes to birth – as without Light, nothing flowers.” ~ Author Unknown

Rosemary Heise, age 68, of Marshall, Minnesota, passed away on Friday, April 15, 2016, at her home in Marshall with family at her side. Memorial Services are 2:00 PM Monday, April 18, 2016, at the Hamilton Funeral Home in Marshall. Reception... View Obituary & Service Information

The family of Rosemary Patricia Heise created this Life Tributes page to make it easy to share your memories.

Rosemary Heise, age 68, of Marshall, Minnesota, passed away on...

Send flowers to the Heise family.