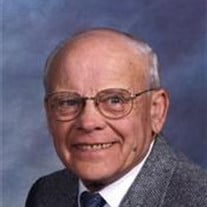 Marshall, Ruben Holstein, age 87, of Marshall, passed away on Tuesday, November 1, 2011 at the Prairie Home Hospice House in Marshall. Funeral services will be 11:00 A.M. Saturday, November 5, 2011 at Wesley United Methodist Church in Marshall. Visitation will be Friday from 5-7 P.M. with a prayer service at 7:00 P.M. at Hamilton Funeral Home and continue one hour prior to the service at the church. Burial will be at Marshall Cemetery. Ruben Leslie was born to Julius and Adelia (Rahlfs) Holstein on November 10, 1923 in Tracy. He was baptized at Tracy Methodist Church. Ruben attended country school and graduated from Tracy High School in 1942. Ruben was the captain of his football team and was a 4-H and FFA member. On February 5, 1950, Ruben was united in marriage to Edith Heck at Tracy Methodist Church. The couple farmed raising grain, sheep, cattle, and pigs. Ruben’s daughters had horses as a 4-H project. Ruben was also a Springdale township board treasurer. After retiring from farming, they moved to Marshall in 1988. Ruben drove cars for Lockwood Motors for a number of years and was a taste tester for Schwans. Ruben’s enjoyments included watching the Minnesota Twins and Vikings, and visiting with relatives and friends. After moving to Marshall Ruben prided himself on being the first in their neighborhood to get his snow shoveled and yard work done. Ruben was an active member of Wesley United Methodist Church in Marshall at the time of his death and before moving to Marshall, a member of Tracy United Methodist Church. Ruben passed away on Tuesday, November 1, 2011 at the Prairie Home Hospice House in Marshall. He had reached the age of 87 years, 11 months and 21 days. Ruben is survived by his loving wife, Edith, of Marshall; two daughters, Susan (and Elton) Goeman, of Jeffers and Sharon Johnson and Howard Siegel of San Diego, CA; two granddaughters, Erin Goeman, of Costa Rica and Crystal (Charles) Simpson, of Buffalo, NY; great-granddaughter, Simona Tenorio, of Costa Rica; sister, Violet Newkirk, of OK; brother-in-law, Gerald Armitage, of Sioux Falls, SD; and sister-in-law, Gloria Holstein, of Owatonna, many nieces, nephews and other relatives. Ruben was preceded in death by his parents; brothers and sisters, Clarence, Frank, Gilbert, Arthur, Kenneth Holstein, Evelyn Daniels and Luella Armitage. Blessed be the memory of Ruben Holstein. Please designate memorials to American Heart Association, Prairie Home Hospice House or Wesley United Methodist Church.

The family of Ruben Leslie Holstein created this Life Tributes page to make it easy to share your memories.

Marshall, Ruben Holstein, age 87, of Marshall, passed away on...

Send flowers to the Holstein family.