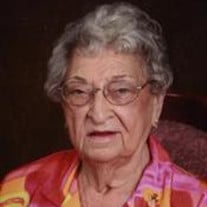 Russell: Ruby E. Miller, age 92, of Marshall, formerly of Russell, passed away at Minneota Manor on Wednesday, June 13, 2012. A Celebration of Ruby's life will be 10:30 A.M. Saturday, June 16th at Grace First Parish. Visitation will be 6:00 P.M. to 8:00 P.M. with a 8:00 P.M. prayer service Friday at Hamilton Funeral Home. Visitation will continue at the church on Saturday, one hour prior to the service. Burial will be in the Russell City Cemetery. Ruby Esther was born on July 2, 1919 in Coon Creek Township, Lyon County, Minnesota to August and Clara (Foss) Pochardt. She was baptized and confirmed at Zion Evangelical Lutheran Church in Island Lake Township. Ruby attended school at rural District 66 through her eighth grade year and then went on to Russell High School graduating in 1937. She did housekeeping for many women in the Russell community and then began waitressing at Shorty and Jeane Greve’s restaurant, where she met Wilbur “Bud” Miller. On February 20, 1941, Ruby was united in marriage to Bud at the Presbyterian Parsonage in Marshall. They began farming east of Russell where their two sons were born, Charles in 1942 and Elwood “Woody” in 1947. In March 1958 they moved to a farm south of Russell in Rock Lake Township and then moved to Iona where they had a business for 9 years. They moved back to Russell in 1977. Ruby worked at Ike and Flossie Hanson’s Café until she retired in July of 1981. Bud passed away in April of 1996. Ruby moved to Boulder Estates in Marshall in 2003. Ruby entered Minneota Manor May 30, 2012 and passed away there on Wednesday, June 13, 2012. She had reached the age of 92 years, 11 months and 11 days. She is survived by her two sons, Charles (and Lesley) of Cokato and Woody (and Sanndy) of Minneota; three grandchildren, Cary (and Jodi) Miller, Lori (and Kevin) Meyer and Spencer (and Peggy) Miller; 9 great grandchildren, Zach Dorweiler, Kayla Miller, Jordin Miller, Brady Miller, Brad Edwards, Natalie Edwards, Olivia Edwards, Nathan Meyer and Madison Meyer; two step grandchildren, Mike (and Joy) Knauss and Fahey (and Dave) Canedy; and two step great grandchildren, Autry and Berkeley Canedy. She was preceded in death by her parents; four brothers, Ralph, Merritt, Donald and Eldred; and three sisters, Lillian, Berniece and Doris. The love of her life was doing things with and for her family. Her other enjoyments were baking (especially chocolate chip cookies and banana bread), bowling, golfing, following the Minnesota Twins and Vikings, playing cards and walking. Ruby was a faithful member of Grace First Parish at the time of her death. Blessed be the Memory of Ruby Miller.

Russell: Ruby E. Miller, age 92, of Marshall, formerly of Russell, passed away at Minneota Manor on Wednesday, June 13, 2012. A Celebration of Ruby's life will be 10:30 A.M. Saturday, June 16th at Grace First Parish. Visitation will be 6:00... View Obituary & Service Information

The family of Ruby Esther Miller created this Life Tributes page to make it easy to share your memories.