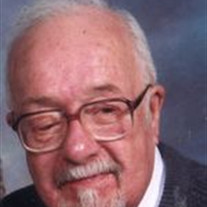 Marshall: Russell Allen Bowers, age 79, of Marshall, passed away at his residence on Tuesday, May 6, 2008. An informal Memorial service and open house will be held at St. Stephen Lutheran Church in Marshall on Saturday, May 24, 2008 at 6:30 P.M. to 8:30 P.M. Condolences to www.hamiltonfh.com. Russell Allen Bowers was born on November 6, 1928 in Milwaukee, Wisconsin. His parents were George and Elsie (Habhegger) Bowers. He graduated from Carlton High School and was baptized into the Christian faith in Westbrook. On November 3, 1951, Russell was united in marriage to Norma Kjellman in Proctor, MN. Russ was a small town newspaper man. He apprenticed at the Carlton County Vidette in 1946, and worked at the Proctor Journal, the Crosby-Ironton Courier and the Minocqua Lakeland Times. In 1959, Russ and Norma bought the Westbrook Sentinel and put out the newspaper together until Russ went to work as the Duplicating Services Manager at Southwest State University in 1968. He retired in 1992. Russ passed away at his home in Marshall on Tuesday, May 6, 2008. He had reached the age of 79 years and 6 months. He is survived by his wife, Norma Bowers of Marshall; four children, Joyce Bowers (Gordon Pedersen) of Minneapolis, Patricia Bowers (Jeff Petersen) of St. Francis, Donald (Carrie) Bowers of Roseville and Barb (Jay) Johnson of Fridley; six grandchildren, Trevor, Alex and Colin Bowers of Roseville and Kyle, Justin and Sara Johnson of Fridley; sister, Donna (Glenn) Waltman of Welches, OR; brother, James (Adrienne) Coates of Chicago, IL; also other relatives and friends. He was preceded in death by his parents; and birth mother, Evelyn (Bowers) Coates. In his younger years, Russ enjoyed camping, fishing, reading and carpentry and in his later years he loved cooking and following the auto races. Russ was a member of St. Stephen Lutheran Church at the time of his death. He also was in the National Guard Reserve from 1950 to 1952. Blessed be the memory of Russell A. Bowers Please designate memorials to the Prairie Home Hospice.

Marshall: Russell Allen Bowers, age 79, of Marshall, passed away at his residence on Tuesday, May 6, 2008. An informal Memorial service and open house will be held at St. Stephen Lutheran Church in Marshall on Saturday, May 24, 2008 at 6:30... View Obituary & Service Information

The family of Russell A. Bowers created this Life Tributes page to make it easy to share your memories.

Send flowers to the Bowers family.