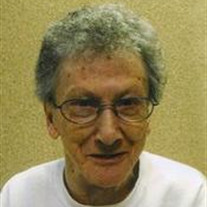 Marshall; Ruth C. Rund, age 87, of Marshall, passed away at the McKennen Hospital in Sioux Falls on Sunday, May 27, 2012. Funeral services will be 11:00 A.M. Saturday, June 2nd at St. Stephen Lutheran Church. Visitation will be one hour prior to the service. Burial will be in the Marshall Cemetery. Ruth Charlotte was born on April 21, 1925 in Athens, Wisconsin to William and Alice Nehrbass. She was baptized and confirmed in the Lutheran faith. She graduated from the Athens High School. She moved to Chicago where she met Clifford Rund. They were married in Chicago and then move to Marshall. Ruth and Cliff owned and operated Cliffs' Quick Service. They sold the business and moved to Prescott, Arizona where they owned and operated a laundramat. Cliff passed away on August 17, 1977. Following Cliff's death, Ruth moved back to Marshall and was employed at Bromen's Office Supply. Ruth entered the Minneota Manor where she received excellent care and then became very ill and was sent to McKennen Hospital in Sioux Falls. She passed away at McKennen on Sunday, May 27, 2012. She had reached the age of 87 years, 1 month and 6 days. She is survived by four children, Jerry (and Karen) Rund of Marshall, Geneva (and Steve) Sykes of St. Paul, Melody (and Vern) Napue of Bloomington and Becky (and Doug) Krause of Fort Wayne, Indiana; eight grandchildren, Kimberly Rund, Craig Rund, Twinka Napue, Jessica Butters-Napue, James Davis, Carissa Smith, Sadie Krause and Jeremy Krause; 14 great grandchildren; a brother, Martin Nehrbass of Phoenix, Arizona; a sister, Esther (and Chuck) Carlson of Prescott, Arizona; also many other relatives and friends. She was preceded in death by her parents and husband Clifford. Ruth's love of her life was being with and doing things for her family. Her enjoyments included doing crossword puzzles, bowling and gardening. Ruth was a faithful member of St. Lutheran Church at the time of her death. Blessed be her memory

Marshall; Ruth C. Rund, age 87, of Marshall, passed away at the McKennen Hospital in Sioux Falls on Sunday, May 27, 2012. Funeral services will be 11:00 A.M. Saturday, June 2nd at St. Stephen Lutheran Church. Visitation will be one hour prior... View Obituary & Service Information

The family of Ruth Charolette Rund created this Life Tributes page to make it easy to share your memories.