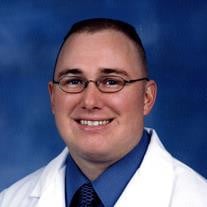 Ryan Brockberg, age 42, of Marshall and Pipestone, passed away on Wednesday, May 3, 2017, at his home in Marshall. Funeral Services are 11:00 a.m. Friday, May 12, 2017, at Good Shepherd Lutheran Church in Marshall. Following a reception at the church, interment will be in the Trosky Cemetery. Visitation will be held from 4:00 – 8:00 p.m. Thursday, May 11, 2017, at the Hamilton Funeral Home in Marshall. A prayer service is scheduled for 7:00 p.m. Visitation will continue one hour prior to the service, from 10:00 – 11:00 a.m. on Friday, at the church. Clergy Officiating: Rev. James Stefanic Organist: Beth Steuck Special Music: On Eagles Wings, by Ellen Lenz, soloist Congregational Hymns: How Great Thou Art, Children of the Heavenly Father , Precious Lord, Take My Hand Active Casket Bearers: Jim Johnson, David Mahlstedt, Josh Johnson, Brian Ehlenbach, Tammy VanOverbeke, Richard Serreyn Ryan Delbert Brockberg was born on July 11, 1974 in Albert Lea, MN to Dennis and Kathy Brockberg. He was baptized August 1974 at St. John’s Lutheran Church in Trosky, MN. He moved with his parents to Marshall, MN in 1976 and was confirmed in May 1989 at Good Shepherd Lutheran Church. He was a boy scout for several years and played trombone in his high school marching band as well as with the community band. In 12th grade, he took his EMT training and joined the Marshall Ambulance, which he worked with for 14 years. He graduated from Marshall High School in 1993, and received his bachelor’s degree in psychology from Southwest State University in 1998. He was united in marriage to Jessica Allen on September 11, 1999 in Marshall, MN. Upon graduating from SDSU in 2003 with a Doctorate in Pharmacology, the couple moved to Olivia, where he worked at Page Drug for three years. He went on to work several years with Cashwise Pharmacy, working at various locations as a floating pharmacist. Two years after the family moved back to Marshall, MN, he took as a job as chief pharmacist at Indian Health Services in Fort Thompson, SD. He spent five years there before taking his current job in 2014 as the Shopko Pharmacy Manager in Pipestone, MN. Ryan enjoyed spending time with his kids, watching Scooby Doo, That 70’s Show, and NASCAR, camping, boating, riding motorcycle, flying model airplanes and helicopters, and learning about the Indian culture. He is survived by his wife, Jessica and their children, Maisey, Madelyn and Ian of Marshall; his parents, Dennis and Kathy of Marshall; his brother, Daniel of Garvin; in-laws, Bill and Carol Allen of Marshall; brothers-in-law, Scott (Cheryl) Allen of Marshall, Carl (Patty) Allen of New Ulm; nieces and nephews: Wyatt, Bella, Drake, Hailey, Christopher, Zachary, Claire, Abigail, Nathan; numerous aunts, uncles and cousins; and his longtime canine companion, Buddy. He was preceded in death by his maternal and paternal grandparents; two cousins; and close family friend, Ken Johnsen.

Ryan Brockberg, age 42, of Marshall and Pipestone, passed away on Wednesday, May 3, 2017, at his home in Marshall. Funeral Services are 11:00 a.m. Friday, May 12, 2017, at Good Shepherd Lutheran Church in Marshall. Following a reception at... View Obituary & Service Information

The family of Ryan Delbert Brockberg created this Life Tributes page to make it easy to share your memories.

Ryan Brockberg, age 42, of Marshall and Pipestone, passed away...

Send flowers to the Brockberg family.