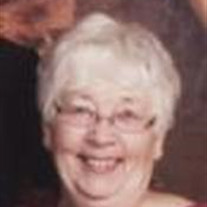 Marshall: Sally Rae Tully, age 80, of Marshall, surrounded by her loving family passed away at her residence on Sunday, November 10, 2013. Memorial services are 2:00 P.M. Thursday, November 14th at St. James Episcopal Church. Visitation will be 4:00 P.M. to 7:00 P.M. with a 6:30 P.M. prayer service Wednesday at the Hamilton Funeral Home. Burial will be in the Spring Lake Township Cemetery in Wisconsin. Sally Rae was born on September 24, 1933 in Frederic, WI to loving parents Vernice Edwin and Winogene Eudora (Britton) Schill. It was in the hills and farmlands of western Wisconsin that she felt most at home, and it will be there, amidst the trees between the Eau Galle River and Cady Creek that she will rest at last. Sally Rae was a graduate of Eau Claire High School, where she was an accomplished actress, poet, and debater. She carried a love of history, poetry and dancing with her throughout her life, and likely beyond. She was most recently a member of the acting company in a production of the Nutcracker in Marshall. From her father she learned to love baseball, and has been an ardent fan and supporter of the national pastime since her youth. From her mother came an intense love of the land, and a passion for gardening which she has passed on to her children and grandchildren. On December 27, 1954, Sally Rae eloped with the love of her life, James Haley Tully, to be united in marriage in Bessemer, MI. Sally worked in the commodities market, at the Monticello Nuclear Power Plant as it was being built, and at Scorpion, one of the first manufacturers of snowmobiles. Sally and Jim lived in Minnesota and Wisconsin, making their home in Marshall for the last 25 years. She was active at St. James Episcopal Church in the vestry and ordained as a member of the Total Ministry Team. Shortly after the birth of their youngest child, Sally suffered a massive brain injury as a result of a stroke. Legally blind and physically disabled, she played the hand she was dealt with grace, humor, and tenacity. She has been canoeing in the Boundary Waters, camped in the Black Canyon of the Gunnison, climbed to Native American ruins in the southwest, explored Ireland, Scotland, and Germany, and danced at the weddings of her children and grandchildren. She has instructed doctors and nurses, and all who have known her, in the art of caring. She is survived by her husband Jim of Marshall; five children, James (and Susan) of Ramsey, Coleen (and Steve) of Tyler, Michael (and Bonnie) of Spring Valley, WI, Daniel of Baldwin, WI and Kathleen of Big Lake, MN; grandchildren, Patrick Foley, Melissa Barfknecht, Shannon Siverling, Breyen Thomsen, James, Megan, Brian, Kayla, Nathaniel, Derrik, Alexander, and Samantha Tully, Jessica Moffitt, Victoria Hatch and Gabrielle Moffitt; great grandchildren Hannah, Reuben, Zebulon, Abagail, Zechariah, Emma, Roland, Reece, Wyatt, Evelyn, Averie and Evan. She leaves behind friends too numerous to name, but not too many to love. She was preceded in death by her parents and brother, Vernice Schill. Blessed be the memory of Sally Rae Tully.

The family of Sally Rae Tully created this Life Tributes page to make it easy to share your memories.

Send flowers to the Tully family.