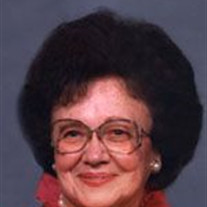 Marshall: Sephorah Nixon Fernholz, age 93, of Marshall, passed away at Granite Falls Manor on Monday, October 25, 2010, Funeral service will be 2:00 P.M. Thursday, October 28, 2010 at the Hamilton Funeral Home. Burial will be in the Lakeside Cemetery in Balaton. Visitation will be one hour prior to the service. Sephorah was born to August and Rachel (Zvorak) Burckhardt on February 23, 1917 in rural Lyon County. She was baptized at the Russell United Presbyterian Church in 1926 and was confirmed there also. She graduated from Russell High School in 1934. On July 1, 1936, Sephorah was united in marriage to Everett Nixon. They farmed southeast of Balaton from 1945 to 1960. They then moved to Balaton and Everett passed away on March 28, 1974. Sephorah moved to Marshall in 1980. She was united in marriage to Pete Fernholz on November 18, 1988. Pete passed away on February 3, 1998. Sephorah entered the Granite Falls Manor in 2007. She passed away there on Monday, October 25, 2010. She had reached the age of 93 years, 8 months and 2 days. She is survived by a brother, Edward (LaVon) Burckhardt of Springfield, OR; four nieces, Julie Burckhardt of Russell, Mary Jo (Doug) Zimmer of Marshall, Donna Bennett of California and Diane McGinnis of Medford, OR; three nephews, Bruce (Deb) Burckhardt of Brookings, SD, Keith (Diane) Burckhardt of Russell and Marland (Barbara) Burckhardt of Carlisle, PA; also many great nieces and nephews. She was preceded in death by her parents; two brothers, Alvin and Gerald Burckhardt; a sister, Dorothy Muzic; and two nephews, David and Alton Burckhardt. Sephorah was a faithful member of Wesley United Methodist Church and also the Weiner Memorial Auxiliary and VFW Auxiliary. Sephorah’s enjoyments in life included music, dancing, flower gardening and reading. Bless be the memory of Sephorah Nixon Fernholz.

Marshall: Sephorah Nixon Fernholz, age 93, of Marshall, passed away at Granite Falls Manor on Monday, October 25, 2010, Funeral service will be 2:00 P.M. Thursday, October 28, 2010 at the Hamilton Funeral Home. Burial will be in the Lakeside... View Obituary & Service Information

The family of Sephorah Nixon Fernholz created this Life Tributes page to make it easy to share your memories.

Send flowers to the Fernholz family.