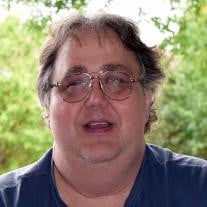 Shawn Roberts, age 52, of Marshall, Minnesota, passed away on Saturday, December 16, 2017, at the Avera McKennan Hospital in Sioux Falls, South Dakota. Memorial Services are 11:00 a.m. Thursday, December 21, 2017, at Radiant Life Church in Marshall. Visitation will be held from 4:00 – 8:00 p.m. Wednesday, December 20, 2017, at the Hamilton Fuenral Home in Marshall. A prayer service is scheduled for 7:00 p.m. Visitation will continue one hour prior to the service, from 10:00 – 11:00 a.m., Thursday at the church. Officiating: Pastor David Sundeen Special Music: Provided by the family Urn Bearer: Brian Roberts Shawn Henry Roberts was born on October 17, 1965 in Marshall, Minnesota, to parents Gary and Sylvia (Sanow) Roberts. He attended school in Marshall through High School, graduating with the class of 1985. He then went on to work in transport for Schwan’s and then he did yard maintenance for Flint Hills. Shawn was known as many things to the many people that called him a friend. “Big Sexy,” “Big Guy,” “Edsel,” and “Serg” were just a few nicknames he gathered over the years. He was a long-time member of the Eagle’s Club in Marshall and enjoyed bowling, trying his luck at pull tabs, and cruising on the pontoon. He loved to make others laugh, particularly at the Round Table of Wisdom. Shawn was a good friend to many and will be truly missed. Shawn passed away on Saturday, December 16, 2017, in Sioux Falls, South Dakota at the age of 52 years, 1 month, and 29 days. Blessed be his memory. Shawn is survived by his parents, Gary and Sylvia (Sanow) Roberts; brothers, Brian Roberts (Amy Perlenfein) of Marshall, Bradley (Gina) Roberts of Sioux Falls, SD; five nieces and nephews, Jayda Roberts of Richmond, VA, Chelsey (Joe) Robinson of Elk River, Melissa (Korey) Kesteloot of Marshall, Jerren (Erin) Roberts of Minneota, Jessa Roberts of Sioux Falls, SD; eight grandnieces and nephews, Chloe, Hayden, Noah, Mia, Owen, Avery, Zachary, Luke; other relatives and friends. He was preceded in death by his maternal grandparents, Frank and Fanna Sanow, and paternal grandparents, Henry and Emma Roberts.

The family of Shawn Henry Roberts created this Life Tributes page to make it easy to share your memories.

Shawn Roberts, age 52, of Marshall, Minnesota, passed away on...

Send flowers to the Roberts family.