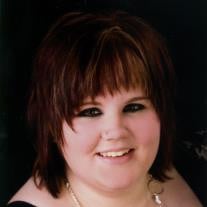 Shelby Morgan Stevens, age 25, of Marshall, Minnesota, passed away unexpectedly on Friday, June 17, 2016, at her home in Marshall. Funeral Services are 1:00 PM Saturday, June 25, 2016, at Cornerstone United Methodist Church in Marshall. Following a reception, interment will be in the Ruthton City Cemetery. Visitation will be from 4:00 – 8:00 PM Friday, June 24, 2016, at the Hamilton Funeral Home in Marshall with a prayer service at 7:00 PM. Visitation will continue one hour prior to the service, from Noon –1:00 PM, on Saturday at the church. Clergy Officiating: Rev. David Johnston Organist: Loronda Schuler Congregational Hymn: Amazing Grace / On Eagle’s Wings Special Music: CD ~ “Knockin’ on Heaven’s Door” by Guns n’ Roses / “If I Had Only Known” by Reba McEntire Casket Bearers: Larry Jacob, Brad Hansen, Wayne Bissett, Tom Olson, Chuck Bissett, Steve Bissett, Al Barber, Chris Johnson, David Miller, TJ Miller, John Zerr, Richard Zerr Shelby Morgan Stevens was born on June 14, 1991, in Mankato, Minnesota. She was the only child of Steen Stevens and Shannon Miller. She was baptized as in infant at the United Methodist Church in Ivanhoe and was later confirmed in her youth at Wesley United Methodist Church in Marshall. Shelby attended school in Marshall, graduating with the Marshall High School class of 2009. She also attended SMSU and was just a year from getting a bachelor’s degree in Social Work. She took the next few years to travel and worked at Perkins, Hy-Vee, the Schwan’s Call Center, and Walmart. She was currently working as a caregiver at H.S.I. in Marshall. She was a hard worker and people person and truly loved working with her clients. Shelby enjoyed her time spent with close friends and family. She was a gutsy and brave person who enjoyed her work and schooling. She loved traveling, rock concerts, music, and modeling various make-up trends. Her generous personality will be greatly missed by those who knew and loved her. Shelby Stevens died of natural causes on Friday, June 17, 2016, in Marshall, Minnesota, 3 days after her 25th birthday. Shelby is survived by her mother, Shannon (and James “Jim”) Jacob of Marshall; grandparents, Curt and Norma Miller of Marshall, Bob and Lois Jacob of Spicer; aunts and uncles, Nicole (and Al) Barber of Tyler, Danielle (and Chris) Johnson of Oak Grove, Sharla (and Ron) Matthys of Boone, IA, Larry (and Becky) Jacob of Marshall, Berta Jensen of Raymond, Lisa (and Darin) Egenes of Kasota; cousins, other relatives and many friends. She was preceded in death by her father, Steen Charles Stevens; grandparents, Sheryl and Terry Stevens; and uncle, John Jacob. In lieu of flowers, memorials are preferred. The family invites attendees to the church basement for refreshments following the service.

The family of Shelby Morgan Stevens created this Life Tributes page to make it easy to share your memories.

Send flowers to the Stevens family.