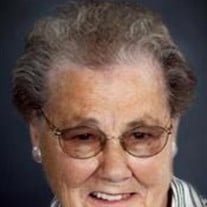 Marshall: Shirley E. Allen, age 87, of Marshall, passed away at her residence on Wednesday, January 15, 2014. Funeral services will be 10:30 A.M. Saturday, January 18th at Wesley United Methodist Church. Visitation will be 4:00 P.M. to 8:00 P.M with a 7:00 P.M. Prayer service Friday at the Hamilton Funeral Home. Visitation will continue at the church on Saturday, one hour prior to the service. Burial will be in the Marshall Cemetery. Shirley Ellen was born on July 12, 1926 in Russell, Minnesota to Allen and Opal (Wood) Halstead. She was baptized and confirmed in the Christian faith. She graduated from the Lynd High School. She was the only one in her family to graduate. On February 28, 1946, Shirley was united in marriage to Frank Ray Allen at the Wesley United Methodist Church parsonage. To this union four children were born; namely, David, Philip, Nancy and Steve. They farmed in Lincoln County before moving to a farm near Dawson. They moved to Marshall in 1951 where she worked at Swifts and Schotts. She also took care of her grand and great grandchildren. The love of her life was her family, especially cooking for them. Her hobbies were doing crafts, Bingo and putting puzzles together. She is survived by her children, Philip (Kim), Nancy ( Richard) Pagel and Steve (Darlene) all of Marshall; 9 grandchildren; 11 great grandchildren; two great great grandchildren; two sisters, Leota Allen of Staples and Violet Allen of Mankato; and daughter-in-law, Lillian Allen of Marshall. She was preceded in death by her parents; husband, Frank (07/27/2012); son, David; siblings, Lee (child), Ionella (Infant), Alvin, Edith, Doris, Lester and Audrey. Shirley was a faithful member of Wesley United Methodist Church at the time of Her death. Blessed be the memory of Shirley Ellen Allen.

The family of Shirley Ellen Allen created this Life Tributes page to make it easy to share your memories.

Send flowers to the Allen family.