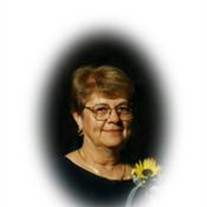 Marshall: Shirley Boraas, age 75, of Marshall, passed away at the Westwood Health Care Center in St. Louis Park on Saturday, November 26, 2011. Funeral services will be 10:00 A.M. Thursday, December 1, 2011 at Good Shepherd Lutheran Church in Marshall. Visitation will one hour prior to the service at the church. Shirley Martha was born to Fred and Anna (Riemers) Rieppel on April 11, 1936 in Holloway, Swift County on the farm. She was baptized, confirmed and received first communion at Immanuel Lutheran Church in Holloway. Shirley graduated from Holloway High School and went on to attend vocational technical college. On June 3, 1956, Shirley was united in marriage to Kenneth A. Boraas. They lived in Appleton, Clarkfield and Marshall. Shirley was a bookkeeper at Avera Clinic in Marshall until retiring in 2011. Shirley passed away at the Westwood Health Care Center in St. Louis Park on Saturday, November 26, 2011. She had reached the age of 75 years, 7 months and 17 days. Shirley is survived by her husband, Kenneth, of Marshall; five children, Richard, of Minneapolis, Patricia (and Joe) Groshens, of St. Louis Park, Randall, of St. Cloud, Pamela (and Pat) Velander, of Brooklyn Park and Michael, of Spicer; five grandchildren, Samual and Corey Groshens, Emma Boraas, and Jacob and Jessica Velander; and two siblings, Melba Feldhake, of Montevideo and Sheldon Rieppel of Appleton. She was preceded in death by her parents. Blessed be the memory of Shirley Boraas.

The family of Shirley Boraas created this Life Tributes page to make it easy to share your memories.

Marshall: Shirley Boraas, age 75, of Marshall, passed away at...

Send flowers to the Boraas family.