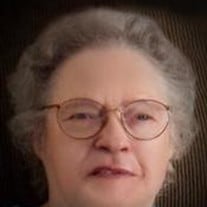 Russell: Shirley Cadwell, age 77, of Russell, passed away at Avera McKennen Hospital in Sioux Falls on Wednesday, May 29, 2013. Funeral service will be 2:00 P.M. Saturday, June 1st at Grace First Parish in Russell. Visitation will be 5:00 P.M. to 8:00 P.M. with a 7:00 P.M. prayer service Friday at the Hamilton Funeral Home. Visitation will continue at the church on Saturday, one hour prior to the service, Burial will be in the Russell City Cemetery. Shirley was born on February 2, 1936 in Holstein, Iowa to Paul and Violet (Peterson) Hurst. Her family moved to Russell when Shirley was 2 years old. She attended school in Russell and was active in 4-H, girls Scouts, Russell Saddle Club, Cheerleading and church activities. Shirley was united in marriage to Calvin Cadwell on March 23, 1952. They lived in Marshall for a brief time and then rented a farm in rural Russell. In 1963, they purchased the farm that became home for them and their five children. Shirley was employed as a paraprofessional at Russell Public School for many years. In 1986, the couple moved into Russell where Shirley enjoyed gardening, taking walks, teaching ceramics classes to school children and spending time with her many friends and family members. Shirley’s life was devoted to raising her family and being active in the community. Shirley was a 4-h leader, Sunday School teacher, member of Bandboosters and Ruth Circle. Her hobbies included gardening, sewing, reading and ceramics. Shirley was a devout church member and enjoyed volunteering for various committees. In 2011, she moved into Colonial Manor Care Center in Balaton where she enjoyed playing Bingo, visitng with friends and watching Wheel of Fortune. Though she was given many challenges throughout her lifetime, Shirley’s faith in Jesus remained strong and she was always cheerful. Her spiritual gift was mercy and she spent much time praying for those whose lives she was concerned about. On May 29, 2013 at Avera McKennen Hospital in Sioux Falls, and surrounded by her family, Shirley passed into the presence of Jesus. Shirley is survived by her five children: Terrie (Robert) Stanford of Valley Springs, South Dakota, Lavonne Johnson of Tracy, Kathy Jacobson of Anoka, Brenda (Scott) Johnson of Russell, Todd (Lynn) Cadwell of Spicer; 16 grandchildren, 11 great grandchildren, brother Wendell (Karen) Hurst of Marshall and many beloved nieces and nephews. Shirley was preceded in death by her husband, Calvin, an infant son Russell, her parents and one sister. Blessed Be The Memory Of Shirley Hurst Cadwell

Russell: Shirley Cadwell, age 77, of Russell, passed away at Avera McKennen Hospital in Sioux Falls on Wednesday, May 29, 2013. Funeral service will be 2:00 P.M. Saturday, June 1st at Grace First Parish in Russell. Visitation will be 5:00 P.M.... View Obituary & Service Information

The family of Shirley Cadwell created this Life Tributes page to make it easy to share your memories.

Russell: Shirley Cadwell, age 77, of Russell, passed away at...

Send flowers to the Cadwell family.