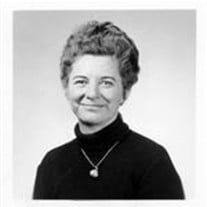 Lynd: Shirley Echo Green, age 87 of Lynd, passed away on Monday, June 9th, 2008. Funeral Services are scheduled for 11:00 A.M. on Friday, June 13, 2008 at Christ United Presbyterian Church in Marshall, Minnesota. Burial will be in the Marshall Cemetery. Visitation will be held Thursday night 4:00 P.M. – 8:00 P.M. with the prayer service at 7:00 P.M., at the Hamilton Funeral Home in Marshall. Shirley Green was born on July 20th, 1920, in Springfield, Minnesota. She was the daughter of Frank and Emma Semans. As a child Shirley grew up in the towns of Sleepy Eye, and Balaton. She married her husband Robert M. Green on December 17, 1939 in Balaton Minnesota, and lived on the farm in Island Lake Township ever since. Shirley was a caring homemaker who enjoyed many different activities. Some of these included reading books and poetry, as well as writing poems and her memoirs. Some of her other interest were sewing, crocheting, dancing, and she baked the best bread. Most importantly she enjoyed spending time with her family and friends, playing “Santa” for her grandchildren; a tradition her mother started. Robert and Shirley loved to spend their winters in Hawaii where they formed many lasting friendships. She will be remembered for the sparkle in her eyes, and her cheerful smile. Shirley is survived by her husband, Robert of Lynd; daughter, Betty Risser of Minneapolis; four sons, Gary (Andrea) Green of Chandler, AZ, Roger (Ardis) Green of Lynd, Myron (Sue) Green of Lynd, and Daniel (Seiko) Green of Alexandria, VA; daughter-in-law, Edie Green, of Minnetonka; nine grandchildren, David (Raina) Green, Karyn (David) Gaffaney, John Risser, Paula (Doug) Van Cleve, Philip Green, Heidi (Marius) Laursen, Gretchen (Wayne) Boerger, Nathan (Laura) Green, Justin (Dee) Green, twelve great grandchildren. She was preceded in death by her parents; son Robert; as well as four brothers, and four sisters. Blessed Be the Memory of Shirley Echo Green.

Lynd: Shirley Echo Green, age 87 of Lynd, passed away on Monday, June 9th, 2008. Funeral Services are scheduled for 11:00 A.M. on Friday, June 13, 2008 at Christ United Presbyterian Church in Marshall, Minnesota. Burial will be in the Marshall... View Obituary & Service Information

The family of Shirley E. Green created this Life Tributes page to make it easy to share your memories.

Send flowers to the Green family.