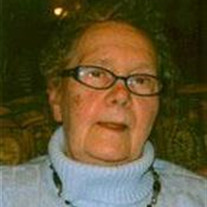 Marshall, Shirley Grimes, age 82, of Marshall, passed away on Thursday, March 10, 2011 at the Marshall Regional Medical Center. Funeral services will be held on Sunday, March 13, 2011 at 4:00 p.m. at the Christ United Presbyterian Church in Marshall. Visitation will be held on Sunday one hour prior to the funeral. Burial will take place at the Marshall Cemetery. Shirley Mae Henningsen was born on April 1, 1928 in Graettinger, Iowa to Charlie and Alma (Hermanson) Henningsen. She was baptized and confirmed in the Lutheran Faith. She received her education at Emmetsburg High School (Iowa), graduating in May 1947. On January 8, 1960 she was united in marriage to Clarence Grimes at the Grace Lutheran Church in Russell. Blessed with four children, Shirley and Clarence lived near Russell and farmed until their retirement in 1979. Shirley moved to Marshall in 1996. Shirley had strong faith and was a member of Christ United Presbyterian Church. Through the years, she was an honorary matron, Church Deacon, and also taught Sunday school. Shirley was an active member and moderator of Presbyterian Women. In her later years, Shirley was a foster grandparent and assisted at Esther’s Kitchen. Shirley was very passionate about faith, family, baking, and sewing. She cherished time spent with family, especially the grandchildren. We lovingly called her “Gramma”. For the past five years, Shirley attended Avera Day Camp and considered Jackie, Candice, Tanya and the rest of the gang as family. Shirley is survived by children: Terry Grimes, his wife Lynn & their children, Val, Connie, & Stephanie; Kevin Grimes, his wife Elizabeth & their children Nicholas & Aisha; Lisa Paulsen, her husband Mark & their children Jennifer, Jasmine, Ryan, Bryce, Bryant, Tavielle, & Mykel; Marsha Rose & her son Bryan; sister Phyllis Wright and her husband Bob.; brother-in-law Elmer Grimes and his wife Mavis; numerous nieces, nephews, & cousins. Shirley is preceded in death by her parents, husband Clarence (1994), brother Kenneth & his wife Elaine , and sister Alice & her husband Lloyd. Blessed Be The Memory Of Shirley Grimes.

Marshall, Shirley Grimes, age 82, of Marshall, passed away on Thursday, March 10, 2011 at the Marshall Regional Medical Center. Funeral services will be held on Sunday, March 13, 2011 at 4:00 p.m. at the Christ United Presbyterian Church in... View Obituary & Service Information

The family of Shirley Mae Grimes created this Life Tributes page to make it easy to share your memories.

Marshall, Shirley Grimes, age 82, of Marshall, passed away on...

Send flowers to the Grimes family.