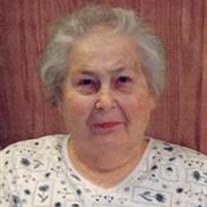 Marshall: Shirley Londgren, age 81, of Marshall, passed away at the Avera-McKennan Hospital in Sioux Falls on Friday, November 11, 2011. Funeral services will be 11:00 A.M. Tuesday November 15th at Christ Evangelical Lutheran Church in Marshall. Burial will be in the Marshall Cemetery. Visitation will be 4:00 P.M. to 8:00 P.M. with a Prayer Service at 7:30 P.M. Monday at the Hamilton Funeral Home. Visitation will continue at the church on Tuesday, one hour prior to the service. Shirley Mae was born to Herlof and Esther (Jorgensen) Jacobson on October 6, 1930 in Clements, MN. She was baptized and confirmed at Christ Evangelical Lutheran church in Marshall. Shirley graduated from Marshall High School in 1948. On April 20, 1952, Shirley was united in marriage to Duane Donald Londgren at Christ Evangelical Lutheran Church. Shirley volunteered for Meals on Wheels and the Hospital Auxiliary. She was an avid garage saler and very supportive of the Marshall Thrift Store. Shirley’s enjoyments included cooking, baking and crafts for family and friends. She also enjoyed playing cards with friends and her grandchildren. She was an active member of Christ Evangelical Lutheran church where she was on the Flower Committee, Altar Committee and the Ladies Aid. During the past year, Shirley made her home at the Minneota Manor where she received excellent care. The family is especially thankful for the care she received at Avera-McKennan Hospital where she passed away on Friday, November 11, 2011. She had reached the age of 81 years, 1 month and 5 days. Shirley is survived by her three children, Jeff (Elisa) of Charlevoix, MI, Cheryl (Mark) Nook of Stevens Point, WI, and Sue (Harvey) Reckard of Menomonie, WI; 12 grandchildren, Brandon (Rachel), Trevor (Jenna), Peter, Breanna, and James Londgren, Jerusha (Andy) Cascione, Mehgan (Matt) Clark, Aaron and Cory Nook, Andrew (Sarah), Laura, and Nathan Reckard; great-grandson, Jacob Londgren; siblings, Blanche (Sherlin) Nelson of Yellville, AR, Jim (Gladys) Jacobson of Marshall, Janet (Vincent) VanDorpe of Glencoe, Dave (Sandy) of St. Cloud, Curt (Carol) of Marshall and Les (Jean) of Dillworth; two sister-in-laws, Donna Jacobson of Minneapolis and Mary Jacobson, of Marshall; and many nieces and nephews. - Hide quoted text - Shirley was preceded in death by her parents; husband, Duane, and siblings, Glen, Lyle, Lois Knoben and Richard. In lieu of flowers, memorials may be sent to Christ Lutheran Church Radio/TV Broadcast or to the American Diabetes Association. Blessed be the memory of Shirley Londgren.

The family of Shirley Londgren created this Life Tributes page to make it easy to share your memories.

Send flowers to the Londgren family.