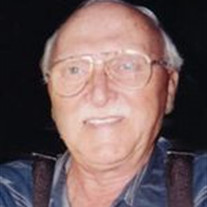 Sidney Milton Dodge, Sr., age 78, of Billings, Montana, died on Wednesday, January 23, 2008 at Seasons Hospice House in Redwood Falls, MN. Funeral Services are planned for 2:30 PM on Saturday, January 26, at the Calvary Baptist church in Marshall. Visitation will be held from 5 to 7 PM on Friday, January 25 at the Hamilton Funeral Home. Burial will be in the Harlowton (Montana) City Cemetery. Sidney Milton Dodge was born on September 6, 1929 in Aberdeen, SD, to Milton and Bertha Imelda (Pickering) Dodge. He was baptized and confirmed in the Christian faith. Sidney attended school in Harlowton, Montana, followed by two years of vo-tech training. He then entered the United States Army. After his honorable discharge, he was married in 1949 to Buelah Lossing in Harlowton, MT. That union produced 5 children, during which Sidney worked as a police officer and deputy sheriff in Montana for 20 years. They then moved to Minnesota and opened the Round Up Cafe in Minneota, which they ran for a few years. They then went to Mankato and ran the Oak Grove facility for mentally handicapped adults. For his retirement, Sidney moved back to Billings, MT, and was well known as Billings #1 sports fan. He attended many high school sporting events and had a tribute video made for him by some of the appreciative athletes. Sidney had recently returned to Marshall before entering the Hospice House in Redwood Falls. Sidney was a member of the Baptist Church, the Masons, and the Eagle’s Club. He died on January 23, 2008, at the age of 78 years, 4 months, and 17 days. Sidney is survived by his 5 children, Imelda Marlene (and Ken) Kroll of Wood Lake, Sidney Dodge, Jr. of Marshall, Brenda (and Marv) Evans of Douglas, WY, Ronald (and Tammy) Dodge of Mankato, and Cheryll (and Brian) Dodge of Madison Lake; a sister, Arlene Blackquiere of Montana; 19 grandchildren; 41 great-grandchildren; and many other relatives and friends. He was preceded in death by his parents, Milton and Imelda Dodge. Blessed be the memory of Sidney Dodge, Sr.

The family of Sidney Milton Dodge created this Life Tributes page to make it easy to share your memories.

Send flowers to the Dodge family.