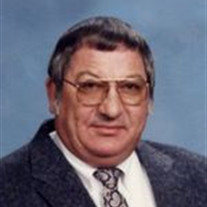 Marshall: Sidney O. Sell, age 68, of Marshall, passed away Wednesday, December 17, 2008. Funeral services will be 1:00 P.M. Monday, December 22, 2008 at the Hamilton Funeral Home in Marshall. Burial will be in the Terrace Lawn Memory Gardens in Montevideo. Visitation will be 9:00 A.m. until the time of the service at the funeral home on Monday. Condolences can be directed to www.hamiltonfh.com. Sidney Otto Sell was born on December 29, 1939 to William and Dora (Holtkamp) Sell. He attended and graduated from the Clara City High School. After graduation, he went to work for Haats Hardware in Echo for several years. He joined the National Guard in April of 1958 and served his country until he was honorably discharged in 1966. Sidney married Marilyn Hanson. They live in Marshall and had a daughter, Jennifer. He worked for McLaughlin & Schultz, Inc of Marshall as a foreman for several years. After developing health issues he chose to retire in 1999. He continued to reside in Marshall. Sidney entered the Minneota Manor on July 10, 2008. He passed away there on Wednesday, December 17, 2008. He had reached the age of 68 years, 11 months and 19 days. Sidney will be missed by many. He is survived by his former wife, Marilyn of Marshall; daughter, Jennifer (Steve) Minett of Balaton; sisters, Muriel Haats of Clara City, Mavis Daggett of Windom and Myrtle (Dick) Haats of Montevideo; brother, Stanley (Dianne) of Clara City; two grandchildren; and many nieces and nephews. He was preceded in death by his parents and his sisters, Mildred Krohn and Marion Sell. Sidney was a member of the First Lutheran Church and his enjoyments in life included fishing, hunting in his younger years, and visiting with family and friends. Bless be the memory of Sidney O. Sell In leu of flowers, memorials can be make to the Prairie Home Hospice at 300 S. Bruce St., Marshall, MN 56258

The family of Sidney Otto Sell created this Life Tributes page to make it easy to share your memories.

Send flowers to the Sell family.