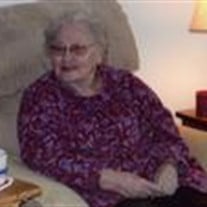 Marshall: Sophia N. Eilders, age 93, of Marshall, formerly of George, IA passed away at the Prairie Home Hospice House on Tuesday, August 7, 2012. Memorial services will be 10:00 A.M. Monday, August 13th at Christ United Presbyterian Church. Visitation will be one hour prior to the service. Burial will be in the Marshall Cemetery. Sophia Noretta was born on June 19, 1919 in Rock Rapids, Iowa to Lambert and Tena (Hilbrands) Popkes. She was baptized at the Ebenezer Presbyterian Church in George, IA. On December 17, 1938, Sophia was united in marriage at the Lyon County Presbyterian Church in George, IA to Benart Eilders. To this union five children were born, namely; Barbara, Thelma, Barry, Loretta and Susanne. They farmed near George for many years. The love of Sophia’s life was her family. She also enjoyed fishing, doing puzzles (jigsaw and word search) watching the Minnesota Twins and Vikings. Benart passed away on January 6, 1994 and Sophie joined him in death at the Prairie Home Hospice House in Marshall on August 7, 2012. She had reached the age of 93 years, 1 month and 19 days. She is survived by four children, Barbara (and Leon) Halling of Ghent, MN, Thelma (and Gary) Kruse of Rapid City, SD, Loretta Campbell of Evansville, MN and Susanne Eilders of Milroy, MN; daughter- in-law Elaine Eilders of Frazee, eleven grandchildren; and five great grandchildren; also many other relatives and friends. She was preceded in death by her parents; husband; son, Barry; granddaughter, Tracy; and son-in-law, Allen Campbell. Blessed be the memory of Sophie Eilders

The family of Sophia N. Eilders created this Life Tributes page to make it easy to share your memories.

Send flowers to the Eilders family.