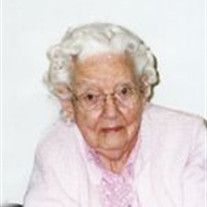 Sophia A. Swanson, age 98, of Tyler, passed away at Tyler Health Care Center on Tuesday, December 30, 2008. Funeral services will be 2:00 P.M. Tuesday, January 6, 2009 at Tyler Missionary Alliance Church in Tyler. Burial will be in the Hope Cemetery. Visitation will be held at the church on Tuesday, one hour prior to the service. Condolences may be submitted at www.hamiltonfh.com. Sophia Albertine Swanson was born on August 8, 1910 near in Island Lake Township, Minnesota, to Richard and Laura (Rockensock) Polesky. She was baptized and confirmed in Island Lake Lutheran Church in Minneota. Sophia graduated from Morris High School and went on to attend college for a short period of time. On February 23, 1934, Sophia was united in marriage to Alden Swanson in Tyler, Minnesota. Sophia worked as a homemaker as they lived in rural Russell, Shelburne Township, Tyler, Hill Street in Marshall, Falls Landing in Pipestone, and finally Sunrise Manor in Tyler. Sophia’s enjoyments in life included gardening, flowers, needlework, wintering in LaFeria, Texas for 22 years, being a craft volunteer, working at the Tyler Nursing Home, the woman’s church organization, and spending time with her children and grandchildren. She is survived by her children, Wayne (and Marilyn) Swanson of Mound, Eldred (and Audrey) Swanson of Russell, Gerald (and Carol) Swanson of Tyler, Roger Swanson of New Castle, Colorado, Glen (and Diane) Swanson of Tonto Basin, Arizona, and Ray Swanson of Tyler; grandchildren, Duane Swanson, Terry Swanson, Leo Swanson, Tom Swanson, Aaron Swanson, Ashley Swanson, Lisa Swanson, Kay Stroyny, and Anita Gadberry; 12 great-grandchildren; sister-in-law, Elizabeth Swanson; and many other relatives and friends. Sophia was preceded in death by her husband, Alden; parents; brother, George; sister, Elda Hass; and a grandchild. Blessed Be The Memory of Sophia Swanson.

Sophia A. Swanson, age 98, of Tyler, passed away at Tyler Health Care Center on Tuesday, December 30, 2008. Funeral services will be 2:00 P.M. Tuesday, January 6, 2009 at Tyler Missionary Alliance Church in Tyler. Burial will be in the Hope... View Obituary & Service Information

The family of Sophia Albertine Swanson created this Life Tributes page to make it easy to share your memories.

Sophia A. Swanson, age 98, of Tyler, passed away at Tyler Health...