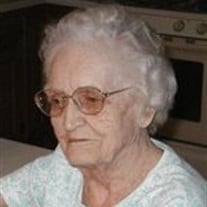 Russell: Stella F. Swanson, age 102, formerly of Russell, passed away at the Avera Morningside Heights Care Center on Wednesday, March 31, 2010. Funeral services will be 10:30 A.M. Monday, April 5. 2010 at Grace First Parish in Russell. Burial will be in the Russell City Cemetery. Visitation will be one hour prior to the service. Stella Frederica was born to Gustav and Ella (Austin) Isaacson on November 3, 1907 in Edina Township, Minnesota. She was baptized and confirmed in the Lutheran Faith at Gethsemane Lutheran Church in Hopkins. She graduated from East Hopkins Elementary in 1921 and Hopkins High School in 1924. She went on to attend the Minneapolis Teacher Training Center at East High School, graduating in 1925. She taught at District 76 in Lyon County for four years and one year at Winthrop in Sibley County. On June 24, 1931, Stella was united in marriage at her parent’s home in Edina to Carl A. Swanson by Rev. Clarence Nelson, Pastor of Mount Olivet Lutheran Church which she was a member. They farmed in Coon Creek Township until 1948 at which time they bought a farm in Lyons Township. They retired from farming in 1968 and moved into Russell. Carl passed away on December 7, 1989. Stella passed away at the Avera Morningside Heights Care Center on Wednesday, March 31, 2010. She had reached the age of 102 years, 4 months and 28 days. She is survived by a grandson, Jay (Carol) Swanson of Zimmerman, MN; great grandson, Carl T. Swanson of Zimmerman; sister, Irene (Vernon) Crass of Kingsburg, CA; also nieces and nephews. She was preceded in death by her parents; two children, Richard A. Swanson and Elizabeth Stervinou; grandson, Jean Stervinou; two sisters, Sally Homberg and Adele Borey; and a brother, Andrew Isaacson. Stella was a very devoted member of the Grace Lutheran Church in Russell where she belonged to the WELCA/Ruth Circle. She also belonged to the Women’s Group of Russell. Bless Be The Memory Of Stella F. Swanson

The family of Stella F. Swanson created this Life Tributes page to make it easy to share your memories.