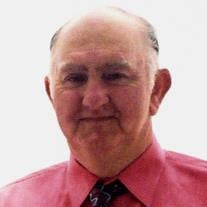 Stephen “Otis” Shaw, age 71, of Marshall, Minnesota, passed away on Sunday, January 21, 2018, at his home in Marshall. Memorial Visitation will be held from 6:00 – 8:00 p.m. Wednesday, January 24, 2018, at the Hamilton Funeral Home in Marshall. A prayer service will begin at 7:30. A second service and interment will happen at a later date in Texas. Stephen Otis Shaw was born on January 7, 1947, in Jasper, Texas. He was the son of Shireald Odis and Evelyn Irene (Sims) Shaw. Otis, as he would become to be called, was baptized as an infant at Zion Hill Baptist Church in Jasper, Texas. He attended school there as well, graduating with the Jasper High School class of 1965. Otis went on to work various jobs after high school. On July 3, 1973, Otis was united in marriage to Mary Leona “Lee” Newcomb in Kirbyville, Texas. The couple made their home in Jasper, Texas and raised a blended family of 6 children. They shared over 30 years of marriage before Lee died in 2003. Otis worked as a crane operator for Louisiana Pacific Building Products, loading and unloading lumber. He retired in 2010. Following Hurricane Katrina, Otis moved to Marshall to be closer to his son, Steve. He enjoyed hunting in his younger days, shopping, and a good meal. But he truly loved to go fishing and took every opportunity to wet a line. Otis is survived by his children, Bobbie Cooper of Magnolia Springs, TX, Trisha (Mike) Waldon-Jourdan of Jasper, TX, Doyle (Kathy) Waldon of Silsbee, TX, Steve Shaw of Marshall, Mary (Richard) Coons of Jasper, TX, Claude Shaw of Jasper, TX; 14 grandchildren, C.J., Amber, Joshua, Tom, Steven, Travis, Gage, Torin, Harley, Kalub, Krystian, Daniel, Austin, Devon; special friend and her daughter, Lilly and Jeanette Diaz of Marshall; brother, Donny (Freida) Shaw of Jasper, TX; nieces and nephews, other relatives and friends. He was preceded in death by his parents, Shireald and Evelyn Shaw; wife, Lee Shaw; and brother, Glen Shaw.

The family of Stephen "Otis" Shaw created this Life Tributes page to make it easy to share your memories.

Send flowers to the Shaw family.