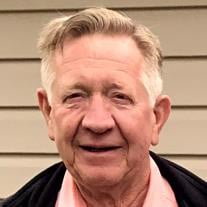 Stephen Swanson, of Marshall, MN, died on Saturday, April 7, 2018 at the Mayo Clinic Hospital in Rochester, MN. He had reached the age of 68 years, 4 months, and 11 days. Memorial Services are 11:00 a.m. Thursday, April 12, 2018, at Christ United Presbyterian Church in Marshall. Following the reception, interment will be in the Russell Cemetery. Visitation will be held from 4:00-7:00 p.m. Wednesday, April 11, 2018, at the Hamilton Funeral Home in Marshall. Visitation will continue one hour prior to the service on Thursday, from 10:00 – 11:00 a.m., at the church. Stephen was born on November 28, 1949, in Slayton, MN, to Wilbur and Donna (Stueland) Swanson. He grew up in Rochester, MN, and moved to Slayton, MN, as a teenager. He was baptized and confirmed in the Lutheran Faith. He graduated from Slayton High School in 1968. Stephen then served in the United States Army and spent 14 months in Vietnam. On May 22, 1971, Stephen was united in marriage to Janet Moat at Christ United Presbyterian Church in Marshall. The couple made their home in Marshall and raised two children: Shari and Jon. He and Jan shared over 46 years of marriage together. He spent 30 years at MMU starting out as a meter reader and working up to Superintendent of Operations. After retirement he worked full-time in his Striping and Sign Business, something he was very proud of. Stephen was assisting in the Marshall Vietnam Memorial that is being planned. He also enjoyed wintering in Arizona for the past 12 years, playing texas-hold-em and pinochle in the park and watching NASCAR races. He is survived by his loving wife, Jan of Marshall; children, Shari (Jeff) Pumper of Owatonna, Jon (Wendy) Swanson of Lynd; six grandchildren, Kirstin, Sam, Dylan, Devynn, Teagan and Colter; siblings, Penny (Dexter) Klitzke of Hutchinson, Mike (Jan) of Boulder City, NV; mother and father-in-law, Don and Ella Moat of Marshall; brothers-in-law, Keith (Margaret) Moat of Marshall and Kent Moat of Carpentersville, IL; nieces and nephews. He was preceded in death by his parents, Wilbur and Donna Swanson. Stephen will be greatly missed. Blessed be his memory.

The family of Stephen Ray Swanson created this Life Tributes page to make it easy to share your memories.