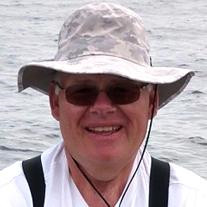 Steven Walter, age 57, of Garvin and formerly of Russell, Minnesota, died peacefully on Monday, August 6, 2018, at his home on Lake Sarah, Garvin, Minnesota. Memorial Services are 11:00 a.m. Friday, August 10, 2018, at Christ Lutheran Church in Slayton, Minnesota. Following a reception at the church, interment will be in the Russell Cemetery. Visitation will be held from 4:00 – 8:00 p.m. Thursday, August 9, 2018, at Hamilton Funeral Home in Marshall. A Prayer Service is scheduled for 7:00 p.m. Visitation will continue one hour prior to the service, from 10:00 – 11:00 a.m. on Friday, at the church. Steven Wayne Walter was born November 23, 1960, to Gerald and Myba (Easterday) Walter in Minneapolis, Minnesota. He grew up in Russell, Minnesota, and was baptized as an infant and confirmed in his youth at Grace Lutheran Church in Russell. Steven attended grade school in Russell, graduating with the class of 1979. He then helped his father on the farm, worked neighboring hog farms, and drove truck. On October 3, 1992, Steven was married to Nancy Negaard at Our Savior’s Lutheran Church in Canby, Minnesota. The couple spent over 25 years of marriage together and had a daughter, Sara. They made their home in Russell while Steven drove for over 36 years, working for several companies including Gravley’s Livestock, B & B Trucking, Southwest Minnesota Dairy, Bornhoft Concrete, and Schmitz Grain. He and Nancy moved to Lake Sarah in 2003. Steven also worked from home occasionally, repairing lawnmowers in his garage for friends and neighbors. Steven was an all-around handyman. His enjoyments in life included fishing, camping, hunting, bowling, riding his motorcycle, golfing, and most of all, being a grandpa. Steven died August 6, 2018, at the age of 57 years, 8 months, and 14 days. Blessed be his memory. He is survived by his loving wife, Nancy Walter of Garvin; daughter, Sara Walter (and Nathan Karsky) of Garvin; granddaughter, Paisley Karsky; sister, Deb Walter of Mayer; mother-in-law, Lucille Negaard of Canby; friend whom he treated like a son, Jarod Grabow of Russell; many nieces, nephews, other relatives, and friends. Steven was preceded in death by his parents, Gerald and Myba Walter; infant daughter; and sister, Judy Johnson.

The family of Steven Wayne Walter created this Life Tributes page to make it easy to share your memories.

Steven Walter, age 57, of Garvin and formerly of Russell, Minnesota,...

Send flowers to the Walter family.