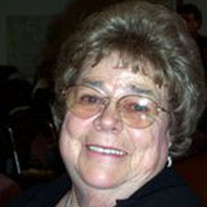 Sylvia Dahl, age 76, of Marshall, formerly of rural Cottonwood, passed away at the Minneota Manor on Saturday, November 7, 2009. Funeral services will be 2:00 P.M. Tuesday, November 10, 2009 at Christ Lutheran Church in Cottonwood. Burial will be in the church cemetery. Visitation will be 4:00 P.M. to 8:00 P.M. with a 7:00 P.M. prayer service Monday at the Hamilton Funeral Home. Visitation will continue at the church on Tuesday, one hour prior to the service. Sylvia Anna Marie Larson was born to William and Sophie (Nelson) Larson on November 4, 1933 in Swede Prairie Township, Yellow Medicine County, Minnesota. She was baptized on November 26, 1933 at the Swede Home Lutheran Church and also was confirmed there. She graduated from the Clarkfield High School in 1951. On September 27, 1953, Sylvia was united in marriage to James G. Dahl at the Swede Home Lutheran Church. They farmed in Lucas and Vallers Township near Cottonwood. James passed away on November 27, 1976. Sylvia continued the farming operation until 1979 when she moved to Marshall. She worked at J.C. Penney in Marshall for a short time. She was an active member of the Christ Lutheran Church for many years and was a member of the St. Stephen Lutheran Church in Marshall at the time of her death. She passed away at the Minneota Manor on Saturday, November 7, 2009. She had reached the age of 76 years and 3 days. She is survived by three children, Mark (Diane) Dahl of Cottonwood, Peggy (Gary) Meyer of Marshall and Sue (Jim) Paradis of Marshall; twelve grandchildren, David Dahl, Katie Wendler, Joshua Dahl, Matt Dahl, Tina Fox, Nathan Meyer, Toby Paradis, Jake Paradis, Megan Paradis Wendy Cradduck, Jim Rialson and Tony Rialson; eleven great grandchildren, Dalton, Kortnee and Austin Wendler, Haaken Meyer, Elizabeth Fox, Ethan Paradis, Gavin, Disiree and Dominick Rialson, and Caitlyn and Kailey Cradduck; a brother, Wendell (Darlyne) Larson of Minneota; also many other relatives and friends. She was preceded in death by her parents; husband James; and daughter, Cynthia Rialson. The love of her life was her family, especially the grandchildren and great grandchildren. Other enjoyments included farming, dogs, cats, playing cards, traveling, and visiting with her many friends at Boulder Estates. Blessed Be The Memory Of Sylvia Dahl

The family of Sylvia Anna Marie Dahl created this Life Tributes page to make it easy to share your memories.