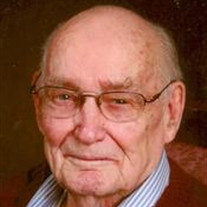 Marshall: Theodore “Teddy” Todnem, age 93, of rural Marshall, passed away Friday, March 9, 2012 at Avera Marshall Regional Medical Center. Funeral services will be 2:00 P.M. Monday, March 12th at the Wesley United Methodist Church. Burial will be in the Marshall Cemetery. Visitation will be Sunday March 11th, 2012 from 4:00 P.M. to 8:00 P.M. with a 7:00 P.M. prayer service at the Hamilton Funeral Home. Visitation will continue at the church on Monday, one hour prior to the service. Teddy was born December 25, 1918 in Stanley Township, Lyon County to Ole and Ursula (Marks) Todnem. He grew up on the farm and attended Marshall High School, graduating in 1937. He enlisted in the United States Army on February 20, 1941. He served in Africa, Sicily, Italy and Anzio. He returned to the states in March 1945 and was stationed at Fort Sill, Oklahoma until his honorable discharge in June 1945. While at Fort Sill he met and married a WAC, Helen Marguerite Smith, on March 7, 1945. To this union was born two daughters and one stillborn son in August 1950. After retiring from farming, Teddy worked as a janitor at Southwest State University for 14 years retiring in 1985. In the spring of 1995, Teddy and Helen celebrated their Golden Wedding Anniversary. Helen passed away in 2005. Teddy joined his loving wife, Friday, March 9, 2012. He had reached the age of 93 years, 2 months and 14 days. Teddy is survived by his two daughters, Joanne (David) Lodge, of Cedar Rapids, IA, and Vicky (Frank) Astar, of Marshall; six grandchildren, Amy (Douglas) Bauer, Kimberly (Nicholas) Tamble, Rebecca (Larry) Robinson, Melissa (Michael) Wiener, Trent (Rachelle) Lodge, Teri (Dale) Patrick, and fifteen great-grandchildren and his sister Ada Schroeder of Jasper. He was preceded in death by his wife; parents; son; one brother and three sisters. Teddy enjoyed going to Mike’s for coffee with his close friend, Johnny Erickson and enjoyed playing cards. He was an active member of the Marshall Senior Citizen Center and enjoyed running the 500 Card Games three times a month. He was a member of the American Legion and VFW. Teddy was an active member at Wesley United Methodist Church at the time of his death. Blessed be the memory of Theodore “Teddy” Todnem.

The family of Theodore "Teddy" M. Todnem created this Life Tributes page to make it easy to share your memories.