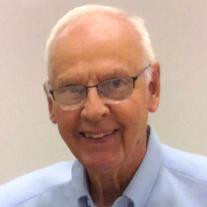 Tom Musser, age 88, of Marshall, Minnesota, died on Tuesday, January 28, 2020, at the Avera Morningside Heights Care Center in Marshall with family by his side. Funeral services are 11:00 a.m. Saturday, February 8, 2020, at Swan Lake Evangelical Free Church in Cottonwood, Minnesota. Following a luncheon, interment will be in the Marshall Cemetery. Visitation will be held from 4:00 – 8:00 p.m. Friday, February 7, at the Hamilton Funeral Home in Marshall, Minnesota. A time to share memories will begin at 7:00 p.m. Visitation will continue one hour prior to the service on Saturday, from 10:00 – 11:00 a.m., at the church in Cottonwood. In lieu of flowers, memorials are preferred to the Southwest Minnesota chapter of Fellowship of Christian Athletes, care of area representative, Robin Knudson: https://my.fca.org/donation?name=robinknudson. Thomas George Musser was born on April 3, 1931, in Fairmont, Minnesota, to parents George and Lucinda (Seiberg) Musser. He grew up on the family farm near Sherburn, Minnesota, and attended school there as well. He was active in high school athletics, lettering 17 times in multiple sports. He graduated with the Sherburn High School class of 1949. Tom furthered his education at Gustavus Adolphus College before returning home to assist on the family farm after his father was injured in an accident. It was in St. Peter that Tom met Ms. Virginia Ringstrom. In 1952, Tom went to serve in the United States Army, where he was stationed in Germany and assigned to play on army sports teams. Upon his honorable discharge in 1954, Tom returned home to marry Ginny. The couple was wed on April 2, 1955, in Minneapolis. He then finished his bachelor’s degree in 1959, and later earned a master’s degree from Mankato State University. During his 3 years at Mankato State, he lettered 8 times (football, basketball, baseball) and was the first recipient of The Reporter’s Outstanding Senior Athlete of the year for 1958-1959. He was scouted by several NFL teams and received a letter of intent to draft from the San Francisco 49ers. However, he chose to focus instead on family, teaching and coaching. Tom and Ginny moved to Marshall in 1959 where he had been hired directly to be the head football coach and teach geography. The MHS football team was undefeated during his first 2 years of coaching. After that he spent many years teaching in all levels of the Marshall Public Schools and coaching. Upon retirement, he worked part-time for 25 years at RALCO, delivering products to farmers among other tasks. He was also not one to sit idle and became involved where needed. Tom was a member of the Swan Lake Evangelical Free Church, attended his regular Tuesday Bible Study, helped establish the Marshall Fellowship of Christian Athletes, helped in many local sports boosters, coached Marshall Football and Marshall amateur baseball, was a past president of the Lyon County Historical Society, served as Scout Master for the local Boy Scouts, and coached baseball internationally for Athletes in Action from 1984-1988. His other enjoyments in life included collecting Native American artifacts, collecting coins, yardwork, and was always lending a hand to neighbors. Tom found great joy in opening his home to those in need, serving alongside Ginny as temporary parents for youth in need. In all he did, Tom just wanted to put a smile on your face. Thomas Musser died on January 28, 2020, in Marshall, Minnesota, at the age of 88 years, 9 months, and 25 days. Blessed be his memory. Tom is survived by his wife of 64 years, Ginny Musser of Marshall; 3 sons, Dave (and Tammy) Musser of Amarillo, TX, Tim (and Deb) Musser of Marshall, Steve Musser of Hutchinson; boys they considered sons, Jack (and Beth) Skjoldager of Magnolia, DE, Herm (and Cheryl) Dybevik of Rochester; 9 grandchildren, Rebecca Musser, Melissa (Alex Schenkman) Musser, Jon (Melissa) Musser, Catherine Musser, Margaret Musser, Sarah (Kevin) Walker, Stephanie (Brian) Wheeler, Bethany Musser, Matthew Musser; 5 great-grandchildren; nieces and nephews, other relatives, and friends. He is preceded in death by his parents, George and Lucinda Musser; brother, Kent Musser, and sisters, Pat Carlson and Laurel Malo.

The family of Thomas George Musser created this Life Tributes page to make it easy to share your memories.

Send flowers to the Musser family.