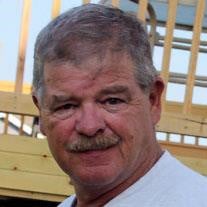 Thomas Appeldorn, age 65, of Marshall, Minnesota passed away Tuesday, May 19, 2015 at the Avera Marshall Regional Medical Center. Funeral Services are 1:00 PM Wednesday, May 27, 2015 at the Hamilton Funeral Home in Marshall. Interment will follow in the Marshall Cemetery. Visitation will be held from 4:00 – 7:00 PM Tuesday, May 26, 2015 at the Hamilton Funeral Home in Marshall. Visitation will continue one hour prior to the service, from Noon – 1:00 PM on Wednesday. Clergy Officiating: Rev. Anne Veldhuisen Active Casket Bearers: Dave Appeldorn, Jim Appeldorn, Joe Appeldorn, Mike Appeldorn, Dick Merkley, Mike Bredeck Thomas George Appeldorn was born March 16, 1950 in Pipestone, Minnesota. He was the son of Henry and Maxine (Smith) Appeldorn. Tom was baptized, received first communion, and was confirmed at St. Leo’s Catholic Church in Pipestone, Minnesota. He attended school in Pipestone and graduated with the high school class of 1968. Tom continued his education at Southwest State University in Marshall where he also worked for Tony’s Pizza. On September 15, 1973, Tom was united in marriage to Ardis Tonsfeldt at the Presbyterian Church in Pipestone. The couple spent 41 years together and raised a son, Troy. They lived in Marshall where Tom worked for over 40 years with Schwan’s in refrigeration maintenance. Tom retired in December of 2014. Tom enjoyed watching the Vikings, pro college football, and NASCAR. He loved to fix things and work around the house. He truly enjoyed the simple things in life and cherished his family. Whenever possible, you could find Tom relaxing by the pool. After a hard-fought battle with cancer, Tom died on May 19, 2015, in Marshall, Minnesota at the age of 65 years, 2 months and 3 days. Blessed be his memory. Tom is survived by his wife, Ardie Appeldorn of Marshall, MN; son, Troy (and Amy) Appeldorn of Shakopee, MN; grandchildren, Sevea, Cohen, and Brynna Appeldorn; mother, Max Appeldorn of Pipestone, MN; sisters, Linn (and Dick) Merkley of Sioux Falls, SD, Sue (and Mike) Bredeck of Madison, MN; brothers, Dave Appeldorn of Glendale, AZ, Jim (and Kim) Appeldorn of Shoreview, MN, Joe Appeldorn of Edina, MN, Mike (and Teri) Appeldorn of Tea, SD; many nephews, nieces, other relatives and friends. He was preceded in death by his father, Henry Appeldorn; and a brother, Jeff Appeldorn. The family invites attendees back to the funeral chapel for a luncheon following the committal service. In lieu of flowers the family would appreciate donations be made to the Avera Cancer Institute of Marshall.

Thomas Appeldorn, age 65, of Marshall, Minnesota passed away Tuesday, May 19, 2015 at the Avera Marshall Regional Medical Center. Funeral Services are 1:00 PM Wednesday, May 27, 2015 at the Hamilton Funeral Home in Marshall. Interment will... View Obituary & Service Information

The family of Thomas "Tom" George Appeldorn created this Life Tributes page to make it easy to share your memories.

Send flowers to the Appeldorn family.