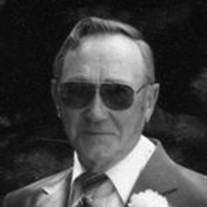 Township: Van M. Lavoie, age 101, of rural Russell, passed away at the Avera Marshall Regional Medical Center on Friday, August 14, 2009. Funeral services will be 2:00 P.M. Wednesday, August 19, 2009 at the Balaton United Methodist Church. Burial will be in the Lakeside Cemetery. Visitation will be 4:00 P.M. to 8:00 P.M. with a 7:00 P.M. prayer service Tuesday at the Hamilton Funeral Home. Visitation will continue at the church on Wednesday, one hour prior to the service. Van Maxwell Lavoie was born to William and Mary (VanDusen) Lavoie on October 31, 1907 near Amiret, Minnesota. He was baptized and confirmed in the Christian faith and attended rural school near his parents homestead. On May 11, 1932, Van was united in marriage to Lucille G. Lavalle in Flandreau, South Dakota. They farmed near Florence, then north of Russell, then Rock Lake and then to Lyons Township on March 6, 1946. Lucille entered eternal life on May 19, 2002. Van joined her on Friday, August 14, 2009. He had reached the age of 101 years, 9 months and 14 days. Van is survived by his four sons, Robert (and Aino) of Russell, Charles (and Maxine) of Marshall, Ronald (and Mary) of Tracy and David of Russell; fifteen grandchildren, Rhonda, Karla, Michelle, Avis, Bonnie, Brian, Russell, Maria, Bobbi, Mark, Rebecca, Jesse, Michael, Bartley and Alisha; many great grandchildren and great great grandchildren; also many other relatives and friends. Van was preceded in death by his parents; wife, Lucille; five brothers, Harlan, Kenneth, Lawrence, Bill and Mark; and a sister, Marie Dove. Van’s enjoyments in life were dancing (especially at Florence), his cats and going to town to eat. His family and farming were the love of his life. Bless be the memory of Van M. Lavoie

The family of Van Maxwell Lavoie created this Life Tributes page to make it easy to share your memories.