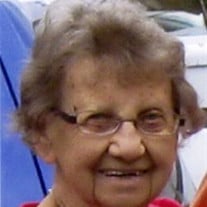 Velma Greeley, age 98, of Marshall, passed away Friday, October 24, 2014, at Avera Morningside Heights Care Center in Marshall. Funeral services are Tuesday, October 28, 2014, 11:00 AM, at Wesley United Methodist Church in Marshall, Minnesota, with interment following in the Marshall City Cemetery. Visitation will be held on Monday, October 27, from 5:00 – 8:00 PM at the Hamilton Funeral Home in Marshall with a prayer service scheduled for 7:30 PM. Visitation will continue on Tuesday, one hour prior to the service, at the church. Clergy Officiating: Pastor Wes Johnson Pianist: Sandy Buesing Special Music: Solos ~ “The Lord’s Prayer,” “Amazing Grace” Congregational Hymns: “How Great Thou Art,” “In The Garden” Active Casket Bearers: Wally Schultz, Bob Tibbits, Ron Schultz, Robert Schultz, Randy Schultz, Ryan Viaene, Shawn Laleman, Jessica Laleman, Jason Greeley Honorary Casket Bearers: Shannon Jackson, Wayne Greeley, Cecil Knieff Velma Lucille Schultz was born on March 30, 1916, seven miles south of Marshall in Sodus Township. She was the daughter of Robert and Dora (Meinzer) Schultz. Velma was baptized as an infant in Amiret and was confirmed in her youth at the Methodist Church in Marshall. She attended country school before helping her parents on the home farm. Velma also made crepe paper flowers that were sold at local stores. She met Harvey Greeley when he came to thrash for her family. On May 5, 1937, Harvey and Velma were united in marriage on Velma’s family farm in Sodus Township. The couple farmed and made their home nearby before moving to Lake Marshall Township in 1972. In 1998, Velma and Harvey moved into Marshall, where she still lived. The couple was blessed with three daughters, Joyce, Darlene, and Jackie. They shared over 63 years of marriage before Harvey passed away in January of 2001. In addition to being a loving homemaker and farm-wife, Velma worked at Toni’s Restaurant in Marshall before retiring at age 68. Velma was a proud and life-long member of Wesley United Methodist Church in Marshall. Her other enjoyments included going to auctions, collecting antiques, quilting, family gatherings, card clubs, dances at the old Blue Moon, and riding her favorite Arabian Horse. Velma Greeley died on Friday, October 24, 2014, in Marshall, Minnesota at the age of 98 years, 6 months and 28 days. Blessed be her memory. Velma is survived by her 3 girls, Joyce (Roger) Amundson of Johnstown, CO, Darlene Greeley of Ames, IA, Jackie (Andy) Kreuzer of Canby; 3 grandchildren, Shannon (Steve) Jackson of Laramie, WY, Ryan (Tara) Viaene of Cottonwood, Jessica (Shawn) Laleman of Marshall; 6 great-grandchildren, Lane Goebel, Cooper Jackson, Parker Viaene, Paige Viaene, Parker Jackson, Isabella Laleman; nieces, nephews, other relatives and many friends. Velma is preceded in death by her parents, Robert and Dora Schultz; husband, Harvey Greeley; and all 5 of her siblings. The family invites everyone to the church basement following the services for a luncheon.

The family of Velma Lucille Greeley created this Life Tributes page to make it easy to share your memories.

Send flowers to the Greeley family.