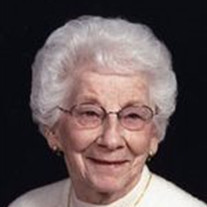 Marshall: Vera L. McVey, age 88, of Marshall, passed away at the Colonial Manor Nursing Home in Balaton on Thursday, May 14, 2009 after a three year battle with Alzheimer’s. Funeral services will be 2:00 P.M. Monday, May 18, 2009 at the Wesley United Methodist Church. Burial will be in the Riverside Cemetery in Spencer, Iowa. Visitation will be two hours prior to the service at the church. The Hamilton Funeral Home is in charge of the arrangements. Condolences may be submitted at www.hamiltonfh.com. Vera Lottie Walstrom was born on March 7, 1921 to parents Gustave and Lucille (Schuck) Walstrom in Royal, IA. She graduated from the New London, WI High School in 1938. She went on to attend college in Appleton, WI for two years. In 1940 she worked for Dr. Monstad in New London. In 1945 she went to work at a lumber yard in Spencer, IA. On January 15, 1947, Vera was united in marriage to Harvey B. McVey in New London. They moved to Marshall where Vera was employed as a bookkeeper for the Marshall Fruit Company. In 1954, Harvey and Vera built their new home and Vera became a homemaker. She was an active member of the Wesley United Methodist Church and the UMW circle. She also was a 4H leader and member of the American Legion Post 113 Auxiliary. Her enjoyments included bowling, golfing, sewing, riding horses, gardening (especially flower gardening), journaling, and conversing with family and friends. Vera passed away at the Colonial Manor Nursing Home in Balaton on Thursday, May 14, 2009. She had reached the age of 88 years, 2 months and 7 days. She is survived by her husband, Harvey of Marshall; son, Bruce (and Laurie) McVey of Marshall; grandson, Adam McVey; and three step grandchildren, Thane, Andy and Trevor Hemish. She was preceded in death by her parents; sister, Viva Stein; an infant brother; and a niece. Blessed be the memory of Vera McVey Hamilton Funeral Home 507-532-2933

The family of Vera L. McVey created this Life Tributes page to make it easy to share your memories.

Send flowers to the McVey family.