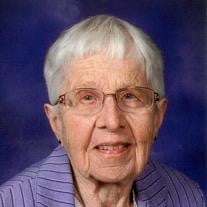 Vera Mohwinkel, age 93, of Marshall, Minnesota, died on Monday, July 9, 2018, at the Avera Marshall Regional Medical Center in Marshall. Funeral Services will be 10:30 am on Thursday, July 12, 2018, at Christ Evangelical Lutheran Church in Marshall. Interment will follow in the Marshall Cemetery. Visitation will be held from 5: 00 -7:00 p.m. Wednesday July 11, 2018, at the Hamilton Funeral Home in Marshall and will continue one hour prior to service, from 9:30 – 10:30 a.m. on Thursday, at the church. Vera Violet Schlemmer was born on October 15, 1924, near Wood Lake in Posen Township, Yellow Medicine County, Minnesota. She was the daughter of Henry and Clara (Goltz) Schlemmer. She was baptized on November 9, 1924, and confirmed her faith on May 22, 1938, both at St. Luke’s Evangelical Lutheran Church in Posen Township. Vera attended country school and then Wood Lake High School graduating with the class of 1942. Vera was united in marriage to Raymond Mohwinkel at St. Luke’s Evangelical Lutheran Church on June 10, 1945. The couple resided in Marshall and they were blessed with 2 children, Sharon and Steve. Vera was a homemaker for her children’s growing up years and was a mother first and foremost. She was meticulous in her life and kept everything clean and organized. She was an expert with starch and an ironing board and one of her favorite chores was butchering chickens. Vera and Ray were married for 61 years until his death in 2006. When the children grew, Vera cleaned over 20 homes and hung wall paper. Many will know her as the toy lady from Runnings. She was a dedicated Christian and attended Christ Evangelical Church in Marshall for 70 years. She was very active there participating in Ladies Aide, choir and the Mission Society. Vera had many varying interests including sewing, embroidering dishtowels, making and sharing peanut bars, making wheel rugs, eating lemon pies, and spending time with family and friends and animals, namely cats. As she aged, doing puzzles and playing bingo were her favorite pastimes. Vera is survived by her two children, Sharon (Dave) Schimnowski of Cottage Grove, Steve Mohwinkel (Jacki Knigge) of Marshall; two grandchildren Paul (Melissa) Schimnowski and their children, Erick, Emma, Greta, and Clara and Jon (Lee) Schimnowski and their children, Ava, Jonah, and Lucas, all of Mahtomedi; brother, Wally Schlemmer of Marshall; sister, Marilyn Brusven of Cottonwood; sister-in-law, Verlaine Schlemmer of Marshall. Vera is preceded in death by her parents, husband, and brother, Harold Schlemmer. Blessed be her memory.

The family of Vera Violet Mohwinkel created this Life Tributes page to make it easy to share your memories.

Send flowers to the Mohwinkel family.