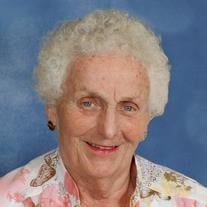 Verda Scheele, age 83, of Marshall, Minnesota, passed away on Sunday, February 12, 2017 at the Avera Morningside Heights Care Center in Marshall. Celebration of Life Memorial is 2:00 p.m. Saturday, February 18, 2017, at First Lutheran Church in Marshall. Interment will be in the Marshall Cemetery. Visitation will be held one and a half hour prior to the service, from 12:30 – 2:00 p.m., Saturday at the church. Clergy Officiating: Rev. Scott Fuller Organist: Rosie Sorum Special Music: Jesus Loves Me & Nearer My God To Thee ~ Pam Swanlund, Laurie Morgan, Peggy Malinowski, Gretchen Topping Congregational Hymns: God Bless America / How Great Thou Art / Amazing Grace Urn Bearers: Jenny Freng & Jackie Groth Verda Scheele was born May 12, 1933, to Henry and Anna (Jahnke) Bartels on the family farm in Sibley County, Minnesota. She was baptized and confirmed at First Evangelical Lutheran Church in Glencoe. Verda attended grade school at First Evangelical Lutheran School and graduated from Glencoe High School with the class of 1950. She went on to further her education at the University of Minnesota, studying medical terminology. Verda then worked at Miller Hospital in St. Paul where she dictated for physicians. Verda was united in marriage to Ed Scheele on September 24, 1955, at First Evangelical Lutheran Church in Glencoe. The couple then made their home in Marshall. Verda worked as office manager and co-owner of the two businesses that she and Ed operated in Marshall: Distributors for Oak Grove Dairy products and then Diamond Clear Ice. The couple retired February 1, 1990. Verda and Ed Lived in Cross Lake, Naples (Florida), and Longville before returning to Marshall in 2011. Verda attended First Lutheran Church in Marshall where she was a member for over 60 years. She was also a proud member of the Marshall American Legion Auxiliary and Marshall VFW Auxiliary. Verda volunteered countless hours of administrative services to the Marshall Fire Department while Ed served as Chief and also the Missouri Valley Packaged Ice Manufacturers Association while Ed served as President, highlighted by hosting annual conventions for both organizations. Verda was a wonderful wife, great mother and grandmother. Being a lover of fun, she enjoyed entertaining and always had a joke or story to tell. Socializing with friends seemed to go better with a cold beer and her beloved grouper sandwich or walleye sandwich, depending on her locale. She loved playing golf - once scoring a hole-in-one! While living in Florida, she took many trips to the Naples Pier each week to witness the sun set. Over the years Verda also enjoyed taking pictures, polka dancing, playing cards, bowling, fishing, baking the best ever chocolate chip cookies, crocheting, attending sporting events, afternoon pontoon rides, word find puzzles, talking in German and almost daily car rides with Ed, and spending time with those she loved so much. Verda Scheele died February 12, 2017 at the Avera Morningside Heights Care Center in Marshall, Minnesota, at the age of 83 years and 9 months. Blessed be her memory. She is survived by her husband of 61 years, Ed Scheele; children, David (Nancy) Scheele of Prior Lake, Susan of the Twin Cities; two grandchildren, Jenny (Aaron) Freng of Shakopee, Jackie (Steve) Groth of Prior Lake; three great-grandchildren and 1 on the way, Sydney, Zachary, Ryan; brother, Marvin (Pat) Bartels of North Platte, NE; sister-in-law, Marlain Elling of Deephaven; many nieces, nephews, other relatives, and friends. Verda is preceded in death by her parents, Henry and Anna Bartels; sisters, Rosa Gebhardt, Mildred Stenzel, Mabel Tabaka, Ramona Oxborough; brothers, Karl Bartels, and Leslie Bartels In lieu of flowers, memorials are preferred to the American Heart Association (donatenow.heart.org) The family invites attendees to a reception following the interment in the church basement.

The family of Verda Alvina Scheele created this Life Tributes page to make it easy to share your memories.

Verda Scheele, age 83, of Marshall, Minnesota, passed away on...

Send flowers to the Scheele family.