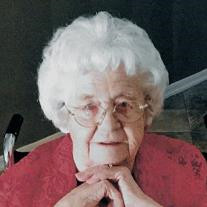 Verla Wiegers, age 94, of Peoria, Arizona, and formerly of Marshall, Minnesota, passed away on Saturday, September 9, 2017, at the Silverado Peoria Memory Care Community in Peoria, Arizona. Funeral Services are 1:00 p.m. Saturday, September 16, 2017, at Christ Evangelical Lutheran Church in Marshall, Minnesota. Interment will follow in the Marshall Cemetery. Visitation will be held one hour prior to the service, from 12:00 – 1:00 p.m., Saturday at the church. Verla Clara Lafrentz was born on February 14, 1923, in Posen Township, Minnesota. She was the daughter of George and Flora (Markgraf) Lafrentz. Verla was baptized March 11, 1923, and confirmed May 16, 1937, in the Christian faith at St Luke's Church in Posen Township. She attended Posen Parochial School and graduated from Wood Lake High School in 1941. Verla furthered her education by attending Canby Teachers Training and later Mankato State University. On June 8, 1947, Verla was united in marriage to Maynard Wiegers at the St Luke's Church in Posen Township. The couple lived and farmed near Marshall and Amiret, Minnesota. In additional to being a loving homemaker and farm wife, she taught many children in one room-school houses in Echo and Cottonwood, Minnesota. Upon retiring, they moved into Marshall in December of 1988. Verla and Maynard were blessed with over 56 years of marriage and raised two children. Maynard passed away in June of 2003. After Maynard's death Verla moved into Boulder Estates, residing there from October of 2003 until August of 2014. She has since lined in Peoria, Arizona, near her two daughters. Verla's enjoyments in life included gardening, cake decorating, reading, baking with yeast, and in her younger days, she gave many readings at bridal showers. She was a faithful member of Christ Evangelical Lutheran Church in Marshall, serving with the Ladies Aid and Mission Society. Verla was active in the Lyon County Extension, served as county secretary, and was honored as Lyon County Homemaker. Verla Wiegers entered her heavenly home on Saturday, September 9, 2017, in Peoria, Arizona. She had reached the age of 94 years, 6 months, and 26 days. Blessed be her memory. Verla is survived by her daughters, Linda (and Richard) Paulos of Rio Verde, AZ, Debra (and Gregory) Timm of Goodyear, AZ; grandson, Wade (and Sonya) Timm of Burnsville, MN; brother, Kenneth (and Bernadine) Lafrentz of Sartell, MN; nieces, nephews, other relatives, and friends. Verla is preceded in death by her parents, George and Flora Lafrentz; husband, Maynard Wiegers; grandson, Bryan Timm; brother, Milo Lafrentz; and sister, Lorna Braun.

The family of Verla Wiegers created this Life Tributes page to make it easy to share your memories.

Verla Wiegers, age 94, of Peoria, Arizona, and formerly of Marshall,...

Send flowers to the Wiegers family.