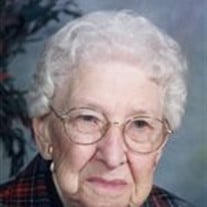 Lake Benton: Verna K. Hurd, age 98, of Marshall, formerly of Lake Benton, passed away Tuesday, March 16, 2010 at the Minneota Manor. Funeral services will be 3:00 P.M. Saturday, March 20, 2010 at the lake Benton United Methodist Church. Burial will be in the Hillside Memorial Cemetery in Lake Benton. Visitation will be 4:00 P.M. to 6:00 P.M. with a 6:00 P.M. prayer service Friday at the Hamilton Funeral Home. Visitation will continue at the church on Saturday, one hour prior to the service. Verna Katherina was born to Herman and Anna Johannsen on February 2, 1912 in Lincoln County. She was baptized on November 24, 1918. She attended school at District 17 in Drammen Township. On March 19, 1930 she was united in marriage to Alfred Elmer Hurd in Drammen Township where they farmed until 1975. They moved to Lake Benton and retired. Alfred died on November 21, 1997. Verna moved to Marshall Square Apartments in September of 1998 until she entered the Minneota Manor on October 22, 2008. Verna K. Hurd passed away Tuesday, March 16, 2010 at the Minneota Manor. She had reached the age of 98 days, 1 month and 14 days. She is survived by her eight children, Betty (and Clem) Sik, of Marshall, Delores (and Ray) DeVos, of Taunton, Jack, of Sibley, IA, Lila (and Alvin) Hammerschmidt, of Wabasso, Darlene Bontjes, of Breckenridge, Dale (and Linda), of Melrose, Gary (and Terri), of Marshall and Brent (and Donna), of Sheldon, IA; twenty-eight grandchildren; thirty-six great-grandchildren; and sixteen great-great-grandchildren; and many other relatives and friends. She was preceded in death by her parents; husband; four grandchildren; one great-great-grandchild; one daughter-in-law; two son-in-laws; four brothers; and six sisters. Verna enjoyed her time at Marshall Square Apartments where she had many friends. Her other enjoyments included playing cards and Bingo, watching the Twins, going to the casino, cooking and baking (especially Banana Cream and Apple pies) and spending time with all her family. She was a member of Lake Benton United Methodist Church. She held office in Ladies Aid, Busy Club and the Senior Citizens while living in Lake Benton. Blessed be the memory of Verna Katherina Hurd.

The family of Verna K. Hurd created this Life Tributes page to make it easy to share your memories.

Send flowers to the Hurd family.