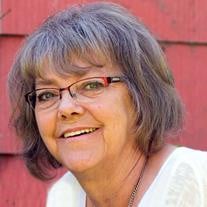 UPDATE: Due to the expected weather today, the family has decided to push services back one day. Please note the updated schedule. Thank you. Vicki Wurscher, age 63, of Milroy, Minnesota, died on Friday, February 7, 2020, at Sanford Medical Center in Sioux Falls, South Dakota. Memorial Services are 2:00 p.m. Friday, February 14, 2020, at First Lutheran Church in Marshall, Minnesota. Private Interment will be at a later date. Visitation will be held from 4:00 – 8:00 p.m. Thursday, February 13, 2020 at the Hamilton Funeral Home in Marshall. A Prayer Service is planned for 7:30 p.m. Visitation will continue one hour prior to the service, from 1:00 p.m. – 2:00 p.m. on Friday, at the church. Vicki Lynn Bowers was born on April 16, 1956, in Clark, South Dakota, to parents Reamer and Helen (Claussen) Bowers. She was baptized as an infant and confirmed in her youth at the Peace Lutheran Church. She attended school in Clark and following high school, Vicki earned her medical assistant certificate from Lake Area Technical Institute in Watertown, South Dakota. On September 27, 1975, Vicki was united in marriage to Tom Wurscher at her church in Clark. The couple made their home in Lucan, Minnesota, for a few years before moving to Milroy in 1978. Vicki worked several jobs including waitress at her aunt’s bar, the Imperial Lounge in Clark, SD, secretary for the local Ag Service and Creamery in Milroy, Johnson’s Jewelry in Redwood Falls, Wabasso Grain & Feed, secretary for Wurscher Elevator Construction, Milroy City Clerk, Milroy School and then the Oasis in Milroy. She was a large part of the community. From being part of the Lions Club to taking the lead on various community activities, Vicki’s willingness to serve others will be missed by many. Vicki’s enjoyments in life included bowling, billiards, playing Bunco, and tending to her flowers. She lived to be a mother and grandmother. Her family and friends were her passion and she was also known to take in the community. Vicki was a second mother to many and an extension of family to her friends. Vicki Wurscher died unexpectedly on February 7, 2020, in Sioux Falls, South Dakota. She had reached the age of 63 years, 9 months, and 22 days. Blessed be her memory. Vicki is survived by her husband of 44 years, Tom Wurscher of Milroy; 3 children, Brock (and Jessie) Wurscher of Marshall, Heather Wurscher of Milroy, Jessica (Josh) Gronli of Wabasso; 4 grandchildren, Jax Wurscher, Braxton Wurscher, Jaelyn Gronli, John Gronli, and Jocelyn Gronli (due to join the family in May); sisters, Ruth Wittrock of Clark, SD, Rita (Charlie) Zeck of Clark, SD, Rae Jean (Mike) Flora of Clark, SD; mother-in-law, Shirley Wurscher of Marshall; nieces and nephews, other relatives, and many friends. She is preceded in death by her parents, Reamer and Helen Bowers; father-in-law, Ed Wurscher; and brother-in-law, Jim Wittrock.

UPDATE: Due to the expected weather today, the family has decided to push services back one day. Please note the updated schedule. Thank you. Vicki Wurscher, age 63, of Milroy, Minnesota, died on Friday, February 7, 2020, at Sanford Medical... View Obituary & Service Information

UPDATE: Due to the expected weather today, the family has decided...