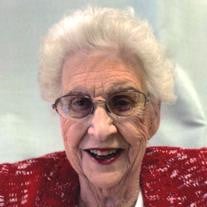 Viola Braakman, age 92, of Marshall, Minnesota, died on Friday, February 22, 2019, at Avera Marshall Regional Medical Center in Marshall, Minnesota. Funeral Services are 11:00 a.m. Thursday, February 28, 2019, at Christ Evangelical Lutheran Church in Marshall. Following a reception, interment will be in the Le Mars Memorial Cemetery, Le Mars, Iowa. Visitation will be held just before the service, from 9:30 – 11:00 a.m., on Thursday, February 28, 2019, at the church. Viola Margaret Hamann was born to Emil and Therese (Doering) Hamann on May 8, 1926, on a farm near Merrill, Iowa. She was baptized on December 8, 1926, and confirmed in 1939, both in the Christian faith. Vi attended Liberty Consolidated School through 8th grade and graduated from Le Mars Central High School in 1943. On July 18, 1947, Vi was united in marriage to Frederick W. Braakman in Sioux Center, Iowa. They were blessed with three children, Linda, Betty, and Barry. Vi was a homemaker for the early years of their marriage and eventually became the Postmaster in Green Valley, Minnesota. After the post office was closed in 1973, she went to work at Schwan’s. She retired from her job there in 1985. Vi loved to bake and most days neighborhood friends would stop by to visit and enjoy coffee and baked goods. She also enjoyed having friends over for meals and there have been many recipes shared over the years. Vi was very good at giving her girls perms in their hair as well as the daughters of many of her friends. Stories abound about the curls! Vi did a lot of sewing for her daughters and she and her mother made most of the girls’ school clothes when they were young. She enjoyed embroidery projects, knitting, and did beautiful crochet work. She loved a clean home and made sure the girls’ rooms passed muster before they could go out to play on Saturday mornings. Vi was a dedicated Christian and attended Christ Evangelical Lutheran Church for nearly 70 years. She was active there in Ladies Aide and was a Charter Member of the Mission Society and also taught Sunday School. She and Fred enjoyed many weekends “up at the lake” and they made many wonderful friends at Lake Ida. Viola Braakman died on February 22, 2019, in Marshall, Minnesota, at the age of 92 years, 9 months, and 14 days. Blessed be her memory. Vi is survived by two children, Linda (Harold) Dieken of Marshall, Betty (Michael) Zeidlhack of Northfield; granddaughter, Erika Zeidlhack of Madison, WI; step-grandchildren, Chad (Kim) Dieken of Victoria, Emmy (Jay) Buboltz of Mankato; step-great-grandchildren, Spencer and William Dieken, Andrew, Mitchell, Brian, and Kathryn Buboltz; brother, Duane Hamann of Lincoln, NE; sister-in-law, Jolene Hamann of Le Mars, IA; nieces and nephews, other relatives, and friends. Vi is preceded in death by her parents; husband, Fred; son, Barry; grandson, Nik Zeidlhack; brothers, Bill Hamann, Fred Hamann (as well as three sisters and two brothers in infancy); sisters-in-law, Donna Rae Hamann, Mildred Hamann, Lillian Braakman Kaczala; brother-in-law, Walter Kaczala; nieces, Mary Lou Hamann Beach, Tamie Hamann Schmidt; and nephews, Lynn Hamann and Kevin Hamann.

The family of Viola Margaret Braakman created this Life Tributes page to make it easy to share your memories.

Send flowers to the Braakman family.