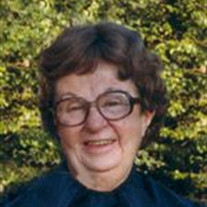 Viola Nelson, age 99, of Marshall, passed away at the Morningside Heights Health Care Center on Tuesday, January 27, 2009. Memorial services will be 2:00 P.M. Saturday, January 31, 2009 at Christ Lutheran Church in Cottonwood. Burial will be in the Christ Lutheran Cemetery at a later date. Visitation will be held one hour prior to the service, at the church. Hamilton Funeral Home in Marshall is handling the arrangements, 507-532-2933. Online condolences may be submitted at www.hamiltonfh.com. Viola Azalia Garry was born on March 25, 1909 in Cottonwood, Minnesota, to Joseph and Mattie (Samuelson) Garry. She was baptized and confirmed at the Presbyterian Church in Cottonwood. She attended Cottonwood High School and went on to the University of Minnesota and then St. Cloud Teachers College. After completing school, Viola taught in Wood Lake, Granite Falls, Rochester, and Cottonwood. On November 3, 1948, Viola married Kenneth Joseph Nelson in Minneapolis, Minnesota. She continued to teach for many years. She taught kindergarten, first and second grades, but especially loved first grade. After her retirement, she and Kenneth would spend four cold Minnesota winter months in Arizona every year. Viola also lived out many of her remaining years at the Hill Street Apartments, where she gained many close friends. Viols enjoyed her teaching, socializing, coffee parties, playing cards, especially bridge, and spending time with family and friends. Viola passed away on January 27, 2009 at Morningside Heights Care Center in Marshall at the age of 99 years, 10 months, and 2 days. She is survived by her daughter, Janet Drummond of Anchorage, Alaska; four grandchildren, Susan Drummond of Anchorage, Cheryl Drummond of Atlanta, Georgia, Michelle Drummond of Anchorage, and Kristen Drummond of Portland, Oregon; and a sister, Leona Peterson. Viola was preceded in death by her husband, Kenneth; parents; and sister, Nora Nellermoe. Blessed Be The Memory of Viola Nelson

The family of Viola Azalia Nelson created this Life Tributes page to make it easy to share your memories.

Viola Nelson, age 99, of Marshall, passed away at the Morningside...

Send flowers to the Nelson family.