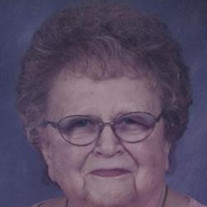 Marshall: Viola Pochardt, age 97, of Marshall, passed away Wednesday, April 10, 2014 at Colonial Manor Care Center in Balaton. Funeral services will be 10:30 A.M. Monday, April 14th at Christ Evangelical Lutheran Church. Visitation will be 5:00 P.M. to 8:00 P.M. with a 7:00 P.M. prayer service Sunday at Hamilton Funeral Home and continue at the church on Monday, one hour prior to the service. Viola was born on March 28, 1917 in Amiret to Arthur C. and Alma (Buesing) Manke.  She was baptized and confirmed in the Lutheran faith.  Viola attended rural school through 8th grade, which was very common during the era.  She became a Nanny for many families throughout her life. Viola met Walter Pochardt and they were married at the Tyler, church parsonage on September 16, 1940.  They made their home on a farm in Island Lake Township, and to this union two children were born, Dale and Janet. They continued farming until retirement in 1966.  Viola was a very active member of her church, Zion Evangelical Lutheran, where she was a member of the Ladies Aid, sang in the choir, and helped with cleaning the church when needed.  Viola was also a member of Christ Evangelical Lutheran Church after moving to Marshall. During her life, Viola  enjoyed baking and gardening.  Spending time with her children, grandchildren and extended family was always her greatest pleasure. She also loved to go fishing and on picnics with Walter and other family and friends. Viola entered Colonial Manor Nursing Home in November 2006 and lived there until her death on Thursday, April 10, 2014.  She had reached the age of 97 years and 13 days. Viola is survived by her daughter, Janet Dale of Marshall; daughter in law Doris Pochardt of Lynd; grandchildren, Tom, Jason  (Stacy) and Randy Dale, Stacey (Judd) Nordin, Duane (Jolene) and Daren Pochardt, Darcy  (Jeff) West; great grandchildren, Krista, Kendra, Michael, Matthew, Mitchell, Brandon, Gavin, Gracelynn, Joslin, Amberly, Christopher and Rachel; her brother, Marvin (Elaine) Manke of Sioux Falls, SD and sister-in-law, Arlene Pochardt of Marshall. Viola was preceded in death her husband, Walter in May 1997; by her parents Arthur and Alma Manke;  her son, Dale; granddaughter Diane Pochardt; grandson, Jeff  Dale; son in law, Rolland Dale, great-grandsons, "DJ" Bauer Pochardt and Nickolas Bauer Pochardt, and sisters Mildred (Wally) Mangen and Bernice (Jim) Markham.  Blessed Be The Memory of Viola M. Pochardt.

The family of Viola M. Pochardt created this Life Tributes page to make it easy to share your memories.

Send flowers to the Pochardt family.