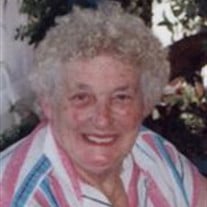 Granite Falls: Viola Rust, age 88, of Marshall passed away on Thursday, July 26, 2007 at the Granite Falls Manor. Funeral Services are scheduled for 11:00 A.M. on Monday, July 30, 2007 at Wesley United Methodist Church in Marshall. Burial will be in the Hendricks Cemetery. Visitation will be 3:00 P.M. to 6:00 P.M. Sunday, July 29, 2007, at the Hamilton Funeral Home. Visitation will continue at the church on Monday, one hour prior to the service. Viola Therasa Thomsen was born on April 10, 1919 in Chicago, Illinois to Frank and Carrie (Krauser) Thomsen. On October 16, 1940 she was united in marriage to Harry Rust in Hendricks, Minnesota. They farmed in Elkton, South Dakota, for many years before moving to Balaton, Minnesota. Viola was a farm wife, she milked cows, tended a large garden, raised chickens, and made many blankets. Viola enjoyed baking, crocheting, birds, flowers, gardening, and spending time with family and friends. She passed away on July 26. 2007 at the age of 88 years, 3 months and 16 days at the Granite Falls Manor. She is survived by her daughters, Joan (and Gary) Riisager of Forreston, MN, Shirley (and Gary) Sheets of Rogers, MN, and Ruth (and Gary) Weiss of Lamberton, MN; 9 grandchildren, Brian, Shelly, Brenda, Sherri, Shawn, Kim, Darcy, Bryce, and Angie; several great-grandchildren; and siblings, Violet (and Alver) Kalovesek of Elkton, SD, and Frank Thomsen of Lake Benton, MN. She was preceded in death by her parents; husband, Harry; four brothers, Ralph, Bob, John and LeRoy Thomsen; and a grandson. Blessed be her memory.

The family of Viola Therasa Rust created this Life Tributes page to make it easy to share your memories.

Granite Falls: Viola Rust, age 88, of Marshall passed away on...

Send flowers to the Rust family.