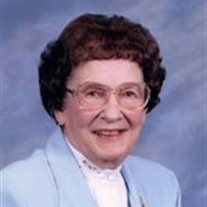 Viola Werner, age 87, died on Friday, December 21, 2007 at Mornignside Heights Care Center in Marshall. Funeral Services are scheduled for 1:00 PM on Monday, December 24, 2007 at the Hamilton Funeral Home in Marshall. Visitation will be from 4 to 7 PM Sunday night and will continue from 10 AM until the time of the service on Monday. Burial will be in Hope Cemetery in Minneota. Viola Dee Cope was born Oct. 24, 1920, at Fort Dodge, Iowa, to James and Clara (Hansen) Cope. She lived in Minneota as a young child and graduated in 1938 from Minneota High School. On July 30, 1940, she was united in marriage to Earl “Bud” Werner in Stewartville, Iowa. They lived in Tracy for about 30 years. Vi worked at several shops, including Vahle Shoe Store, Rignell Hardware, and Graham Clothing Store. She also sold Avon and Beauty Counselor. Bud managed the golf course and Vi managed Bud. In 1972 they moved to Minneota where they built a house and a home. She resided in her green house until 2005 when she went to live with her daughter. In 2006 she moved to Morningside Heights in Marshall. She enjoyed gardening (her flowers were beautiful and she could grow anything), reading her Bible, crossword puzzles, dancing, playing cards and playing Candyland when her grandchildren were little. By far her most enjoyable pastime was spending time with her grandchildren — Tracy, Wendy, Trevor, Megan and Aubrey — they made her eyes sparkle and her heart warm. She also loved her children very dearly and always told them so. She was a caring friend and made people smile with her compliments and witty, humorous remarks. Megan, Michelle, Mary Jane and Lorraine visited faithfully. They always enjoyed their times together. She will be sadly missed by all who knew her. Bud died in 1985 and in 1995 Vi met a special friend, Ralph Van Moorlehem, and he remained dear to her until his death in December 2006. Viola passed away Dec. 21, 2007, at Morningside Heights in Marshall at the age of 87 years. Survivors include her daughter, Kathy (Mrs. Kevin Schultz) of Marshall and her grandchildren Tracy, Wendy, Trevor, and Megan and also one great-granddaughter, Aubrey; two sisters-in-law, Mary Ann Cope and Dill Drevor; and one brother-in-law, Donny Werner. She was preceded in death by her husband, Bud; son, Jack who died in 1977; and an infant son, Michael. She had one brother, Reed Cope and one sister, Betty Henle precede her in death. Also her sister-in-law Ruth Gordon and two brothers-in-law, Marvin Gordon and Harold Drevor. We will love her forever.

Viola Werner, age 87, died on Friday, December 21, 2007 at Mornignside Heights Care Center in Marshall. Funeral Services are scheduled for 1:00 PM on Monday, December 24, 2007 at the Hamilton Funeral Home in Marshall. Visitation will be from... View Obituary & Service Information

The family of Viola Dee Werner created this Life Tributes page to make it easy to share your memories.

Send flowers to the Werner family.