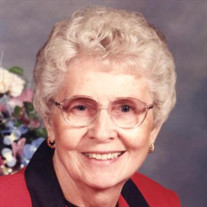 Violet “Vi” Thomasson, age 94, of Marshall, Minnesota, died on Tuesday, June 29, 2021 at Morningside Heights Healthcare Center in Marshall, Minnesota. Visitation will be held 2:00 p.m. Friday, July 2, 2021, at First Lutheran Church in Marshall, until the service at 3:00 p.m. Interment will be in the Marshall Cemetery, followed by a reception back in the church basement. Violet Anna Teichert was born on March 7, 1927 in Grace Township, Chippewa County, Minnesota. She was the daughter of Otto and Minnie (Mattwa) Teichert. Vi grew up on the family farm and attended country school. She was baptized as an infant and was later confirmed in her youth in the Lutheran Church. On October 6, 1946, Vi was united in marriage to Harold “Roy” Thomasson at Grace Lutheran Church near Benson, Minnesota. The couple made their home soon after in Marshall, and raised two boys, James and Jerald. Vi was a devoted homemaker and loving mother. She and Roy shared 38 years together before he died in May of 1984. Roy and Vi spent many hours fishing, at family gatherings and at card clubs. As their boys got older, they bought a camper and traveled to Harlingen, Texas for several winters, and to Lake Amelia in the summers. They were excited to become grandparents and would babysit – and spoil - their grandkids any time. Everyone was welcome into their home, where a sparkling clean house and homemade food and coffee were always ready. In her later years, Vi was very active at the Marshall Senior Center, especially playing cards. Pinochle and Pepper were her favorites, but she would play just about any card game any time. She was known as an accomplished and skilled card player. She also enjoyed bus trips, volunteering and socializing with her friends and family. Following a stroke in January 2017, and subsequent falls, she reluctantly entered Boulder Creek, and then Morningside Heights Care Center. Through it all, she was always impeccably dressed, with polished nails and perfect hair. Vi is survived by her sons, Jim (Bonnie) Thomasson of Marshall, Jerry (Rose) Thomasson of Marshall; 4 grandchildren, Scott Thomasson (Tonia Nordsiden) of Balaton, Shonda (Scott) Lawrence of Tyler, Matthew (Stephanie) Thomasson of Eden Prairie, Joseph (Nancy) Thomasson of St. Paul; 10 great-grandchildren, Cheyenne and Donnie Thomasson, Colten and River Lawson, Madison Lawrence, Lucas, Marcus, Ethan, and Liam Thomasson, and Jayden Thomasson; nephews, nieces, other relatives and friends. She was preceded in death by her parents, Otto and Minnie Teichert; husband Roy Thomasson; and four siblings, Viona Lietz, Melvin, Vernon and Bennie Teichert.

The family of Violet Anna Thomasson created this Life Tributes page to make it easy to share your memories.

Send flowers to the Thomasson family.