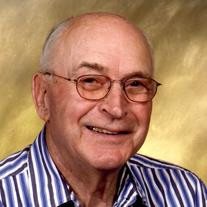 Virgil Bedow, age 88, of Marshall, Minnesota, passed away on Monday, October 10, 2016, at Boulder Estates in Marshall. Funeral Services are 11:00 AM Saturday, October 15, 2016, at the Evangelical Free Church in Marshall. Following a reception, interment will be in the Hope Cemetery in Tyler. Visitation will be held from 4:00 – 7:00 PM Friday, October 14, 2016, at the Hamilton Funeral Home in Marshall. A prayer service will be held starting at 7:00 PM. Visitation will continue one hour prior to the service, from 10:00 – 11:00 AM, on Saturday at the church. Clergy Officiating: Rev. Donald LeClere Soloist: Connie Weiss ~ Beyond The Sunset Organist: Laurel Johnson Congregational hymns: Great Is Thy Faithfulness/When We All Get to Heaven Active Casket Bearers: Scot Glidewell, Ryan Glidewell, Tim Bedow, Kurt Bedow, Dan Bedow, Joel Bedow, and Alex Weiss Honorary Casket Bearers: Michael Bedow Virgil Edwin Bedow was born on December 26, 1927 in Amiret, Minnesota. He was the eldest son of John and Lila (Madden) Bedow. Virgil was confirmed in his youth at the Lutheran church in Arco and was baptized as an adult in the Baptist church in Tyler. He grew up near Arco, attending school there. He attended the University of Minnesota one year before returning home to help on the family farm. On June 30, 1946, Virgil was united in marriage to Avis Cronk at the Free Methodist Church in Armstrong, Iowa. The couple made their home and farmed first North and then East of Tyler for nearly 60 years. They moved to Marshall in 2006 and then into Boulder Estates in 2015. The couple spent an amazing 70 years of marriage together and raised five children: Carol, Steve, Rolly, Connie, and Carla. In the early years on the dairy farm, Virgil enjoyed horses, motorcycling, water fights, and playing Rook. Later he followed football and baseball, and played cards and Pegs & Jokers with his family and friends. He and Avis enjoyed 6 years of wintering in Mission, Texas. Virgil served as an elder at the Marshall Evangelical Free Church and was active with the Gideons and participated in the prison ministry. Virgil's good humor and outgoing friendliness will certainly be missed. Virgil entered his Heavenly home on Monday, October 10, 2016, in Marshall, Minnesota at the age of 88 years, 9 months and 14 days. Blessed be his memory. Virgil is survived by his wife, Avis Bedow of Marshall; five children, Carol (and Rodney) Glidewell of Pipestone, Steve (and Diane) Bedow of Lewisville, TX, Rolly (and Lois) Bedow of Tyler, MN, Connie (and Will) Weiss of Rochester, MN, Carla (and Mike) Spanger of Athens, GA; thirteen grandchildren, Lynn Glidewell, Scot Glidewell, Ryan (and Heather) Glidewell, Tim (and Sandy) Bedow, Kurt (and Nicki) Bedow, Michael Bedow, Dan (and Julie) Bedow, Joel (and Vanessa) Bedow, Victoria (and Andy) Taylor, Alex Weiss, Amy (and David) Rubin, Jared (and Lacey) McChesney, Savannah Spranger; 29 great-grandchildren and another on the way; siblings, Drusilla Pederson, Reva Rode, Betty Hulsebus, Loretta Brand, Ronald (and Jeannette) Bedow, Shirley (and John) Kor, Dennis Bedow; nephews, nieces, other relatives and many friends. He was preceded in death by his parents, John and Lila Bedow; infant brother, Loren Bedow, brother, Roger Bedow, and great-granddaughter, Megan Bedow. The family invites attendees to a luncheon in the church basement immediately following the service.

Virgil Bedow, age 88, of Marshall, Minnesota, passed away on Monday, October 10, 2016, at Boulder Estates in Marshall. Funeral Services are 11:00 AM Saturday, October 15, 2016, at the Evangelical Free Church in Marshall. Following a reception,... View Obituary & Service Information

The family of Virgil Edwin Bedow created this Life Tributes page to make it easy to share your memories.

Virgil Bedow, age 88, of Marshall, Minnesota, passed away on...

Send flowers to the Bedow family.