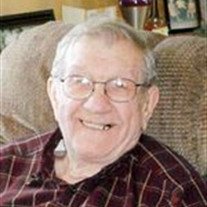 Virgil A. Halter, age 80, of Marshall, passed away at his residence on Monday, December 15, 2008. Funeral services will be 10:30 A.M. Thursday, December 18, 2008 at St. Stephen Lutheran Church. Burial will be in the Marshall Cemetery. Visitation will be 4:00 P.M. to 8:00 P.M. Wednesday with a 7:00 P.M. prayer service at the Hamilton Funeral Home. Visitation will continue at the church on Thursday, one hour prior to the service. Condolences may be submitted at www.hamiltonfh.com. Virgil Albert Halter was born on February 11, 1928 near Sanborn, in Germantown Township, Minnesota, to Rein and Minnie (Trapp) Halter. He was baptized at Zion Lutheran Church in Sanborn. In 1942, he was confirmed in Butterfield. After High School, Virgil went on to graduate with a commercial/business degree from Mankato State University. On June 5, 1948, Virgil was united in marriage to Ardis Malott in St. James, Minnesota. They lived in Butterfield, Hoyt Lakes, and Marshall. Virgil initially farmed before working in the Taconite plants for Erie Mining. He then sold AAA prior to owning Halter Oil Company in Marshall. Finally, he owned Halter Real Estate and retired in 1995. Virgil was a faithful member of St. Stephen Lutheran Church in Marshall at the time of his death. He was also an honorary member of the Eagles Club. His enjoyments in life included playing bingo, gambling with the family at the casino, playing cards (especially Skip-bo and Phase 10), watching football and baseball, fishing at his cabin on Lake Shetek and fishing with his life-long buddy, Ronnie, on Lake Of The Woods, and spending many years at his cabin on Lake Shetek entertaining with family and friends, and spending time with children and grandchildren. He is survived by his wife, Ardis Halter of Marshall; children, Judy (and Bob) Nuy of Marshall, Karen (and Jerry) Rund of Marshall, Steve (and Karen) Halter of Andover; grandchildren, Tammy (and Dan) Stattelman, Kim (and Kerry) Ruppert, Chad (and Amy) Nuy, Craig Rund, Erica (and Eric) Ripken, Amanda (and Nick) Ridley, and Troy Halter; great-grandchildren, Justin and Ashley, Haylee, Zachery, and Katelyn, and Kingsley and one on the way; siblings, Ardell (and Orran) Anderson of San Diego, CA and Elden (and Sharon) Malott of St. James; and many other relatives and friends. Virgil was preceded in death by father, Reinhold Halter; mother, Minnie; step-mother, Frances; infant step-brother, JR Wayne; and brother-in-law and sister-in-law, Norma and Luverne Lenning. Blessed Be The Memory of Virgil Halter.

Virgil A. Halter, age 80, of Marshall, passed away at his residence on Monday, December 15, 2008. Funeral services will be 10:30 A.M. Thursday, December 18, 2008 at St. Stephen Lutheran Church. Burial will be in the Marshall Cemetery. Visitation... View Obituary & Service Information

The family of Virgil Albert Halter created this Life Tributes page to make it easy to share your memories.

Virgil A. Halter, age 80, of Marshall, passed away at his residence...

Send flowers to the Halter family.