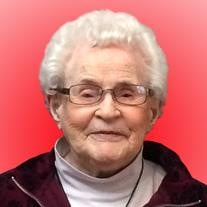 Virginia Isaackson, age 97, of Cottonwood, Minnesota, died on Tuesday, February 4, 2020, at the Prairie Home Hospice - McLaughlin House in Marshall, Minnesota. Funeral Services are 1:30 p.m. Friday, February 7, 2020, at Christ Lutheran Church in Cottonwood, Minnesota. Interment will follow in the Christ Lutheran Cemetery outside Cottonwood. Visitation will be held two hours prior to the service, from 11:30 a.m. – 1:30 p.m. on Friday, February 7, also at Christ Lutheran Church in Cottonwood. Virginia Corrine Kompelien was born on December 1, 1922, on the family farm northeast of Minneota Minnesota, to parents Samuel and Nettie (Stensrud) Kompelien. She was baptized as an infant at the family farm where she grew up and was later confirmed at the Clarkfield Lutheran Church. After attending country school, Virginia graduated from Cottonwood High School with the class of 1941. Virginia then went to Richmond, California, to work during the World War II efforts. Virginia returned home a couple years later and on October 6, 1945, Virginia was united in marriage to Robert Isaackson at the Silo Lutheran Church in Cottonwood (now Christ Lutheran). The couple farmed for over 36 years before they moved to a new home in Cottonwood in 1981. They raised 3 wonderful children. She and Robert spent 58 years of marriage together before his death in 2004. Virginia worked as a devoted homemaker, mother, and farm wife for many years. She was a long-time member of Christ Lutheran Church in Cottonwood, and was active in the church circles, Ladies Aide, and the Neighborhood Club. Virginia was well-known for her angel food cakes and was called by many “the Angel Food Cake Lady”! Her enjoyments in life included quilting, baking, keeping the windows spotless, going for a walk with friends, or catching up with neighbors over a cup of coffee and a cookie, which were always ready. Virginia Isaackson died on February 4, 2020, in Marshall, Minnesota, at the age of 97 years, 2 months, and 3 days. Blessed be her memory. Virginia is survived by her 3 children, Sandra (Ed) Boehne of Cottonwood, Larry (Bev) Isaackson of Cottonwood, Pam Greene (special friend, Janet Eining) of Sioux Falls, SD; 9 grandchildren, Todd (Gail) Boehne of Omaha, NE, Scott (LeeAnn) Boehne of Cottonwood, Jeff Boehne of Cottonwood, Kari Kroger of Grove City, OH, Sara (Bill) Ward of Plymouth, Erin (Jake) Scandrett of Slayton, Lindsay Eining of Sioux Falls, SD, Tanner Eining of Sioux Falls, SD, Tate Eining (Cami Mathis) of Sioux Falls, SD; 20 great-grandchildren; 4 great-great-grandchildren; nieces and nephews, other relatives, and friends. Virginia is preceded in death by her parents, Samuel and Nettie Kompelien; husband, Robert Isaackson; brother, Raymond Kompelien; and sister, Georgia Idso. In lieu of flowers, memorials are preferred to Prairie Home Hospice in Marshall, or Christ Lutheran Church in Cottonwood.

The family of Virginia Corrine Isaackson created this Life Tributes page to make it easy to share your memories.

Send flowers to the Isaackson family.