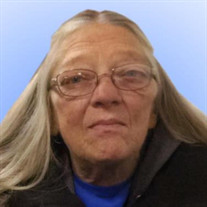 Vonnie Johnson, age 69, of rural Marshall, Minnesota, died on Monday, February 22, 2021, surrounded by her family at her home. Memorial Services will be at 2:00 p.m. Saturday, February 27, 2021, at the Hamilton Funeral Home in Marshall, Minnesota. A walk-through visitation will be held one hour prior to the service, from 1:00 - 2:00 p.m. on Saturday, also at the Hamilton Funeral Home. Occupancy limits and social distancing must be observed throughout all services. Masks are required at all public indoor gatherings. Vonnie Rae Feltman was born to Harvey and Annabelle (Dewitt) Feltman in Adrian, Minnesota, on September 19, 1951. She grew up in rural Worthington and was baptized and confirmed in Sibley, Iowa. Vonnie attended school in Worthington, graduating with the class of 1969. Vonnie was married and had 2 children, Terry and Brent. Vonnie was then united in marriage to Virgil Johnson on December 8, 1976. The couple spent over 44 years together and had 3 more children, April, Justin, and Travis. The blended family made their home in rural Marshall as Vonnie was home caring for her children and helping Virgil on the farm. She would later work at the Schwan’s Ice Cream Plant until she retired in the early 2000s. Vonnie loved to spend time with her family and her dog, Pudgy. Her grandchildren were the light of her life. She also spent hours on the lawn mower and helped in the field and with the pigs. Vonnie enjoyed watching her favorite show, “General Hospital,” and spent time outdoors camping and gardening. In years past, she also cherished dancing with her father and listening to records. Vonnie will be remembered by her husband, Virgil Johnson of Marshall; children, Terry (Bette) Zinnel of Marshall, Brent (Marisa) Zinnel of San Antonio, TX, April (Toby) Valdez of Marshall, Justin Johnson (Chelsea Hussong) of Belview, Travis Johnson of Balaton; grandchildren, Jana Zinnel, Samantha Zinnel, Lola Zinnel, Tristan Zinnel, Vonnie Johnson, JJ Johnson, Skylar Valdez; her beloved dog, Pudgy; mother, Annabelle Feltman of Scott City, KS; sisters, Sandie (Voris) Spittle of Worthington, Brenda (Alan) Ervin of Fairmont, Elaine Rehnelt of Scott City, KS; brother, Larry (Mary) Feltman of Welcome; aunt, Grace Feltman of Rushmore; nieces, nephews, and friends. She was preceded in death by father, Harvey Feltman; and parents-in-law, Merton and Wayvel Johnson. Blessed be her memory.

The family of Vonnie Rae Johnson created this Life Tributes page to make it easy to share your memories.