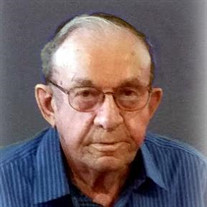 Wallace Schlemmer, age 86, of Marshall, Minnesota, passed away on Sunday, October 28, 2018, at Avera Morning Side Heights Care Center in Marshall. Memorial Services are 11:00 a.m. Thursday, November 1, 2018, at Good Shepherd Lutheran Church in Marshall. Interment will be at a later date in St. Luke’s Lutheran Church Cemetery in Posen Township. Visitation will be held one hour prior to the service, from 10:00 – 11:00 a.m., on Thursday at the church. Wallace Myron Schlemmer was born on August 5, 1932, on the family farm near Wood Lake, in Posen Township, Minnesota. He was the son of Henry and Clara (Goltz) Schlemmer. Wally was baptized as an infant and was confirmed in his youth at St. Luke’s Lutheran Church in Posen Township. He rode his horse to country school and then graduated from Wood Lake High School. He went on to drive truck and do tiling work. On May 9, 1954, Wally was united in marriage to Marilyn Anderson at the Lutheran church in Belview. The couple made their home in Belview before moving back to the family farm outside Wood Lake in 1957. They raised 4 children while Wally farmed. He retired in 1986 and then drove truck for B & B Procurement and Cliff Viessman, Inc. Wally was a member of AMPI, served on the Co-Op Board, and was a long-time member of St. Luke’s Lutheran Church. Wally was a very outspoken person who thrived on a good conversation or argument. When he wasn’t on his Allis-Chalmers, or in a truck, he could be found trying his luck at the casino or around a table with friends and family playing cards. Wallace died on Sunday, October 28, 2018, in Marshall, Minnesota, at the age of 86 years, 2 months, and 23 days. Blessed be his memory. He is survived by his 4 children, Vicki (and Paul) Ditterich of Spicer, Pam (and Gary) McDougall of Willmar, Todd Schlemmer of Rhome, TX, Kirk (and Teri) Schlemmer of Wood Lake; 6 grandchildren, Nicole (Tom) Balko of Redwood Falls, Tanya Jeseritz of Granite Falls, Darin (Becky) Ditterich of Olivia, Troy Ditterich of Spicer, Ashley (Cory) Nietfeld of Melrose, Ethan Schlemmer of Wood Lake; 9 great-grandchildren, McKenzie, Tori, Brad, John, Madison, Nolan, Jayden, Owen, Logan; sister, Marilyn Brusven of Cottonwood; sister-in-law, Verlaine Schlemmer of Marshall; nephews, nieces, other relatives and many friends. Wally was preceded in death by his parents, Henry and Clara Schlemmer; wife, Marilyn Schlemmer; and siblings, Harold Schlemmer and Vera Mohwinkel.

The family of Wally Myron Schlemmer created this Life Tributes page to make it easy to share your memories.

Send flowers to the Schlemmer family.