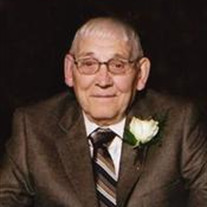 Marshall: Walter DeSaer, age 88, of Marshall, passed way Saturday, May 28, 2011 at the Avera Morningside Heights Care Center. Mass Of Christian Burial will be at 11:00 A.M. Friday, June 3rd at St. Mary’s Chapel in Marshall. Burial will be in the St. Clotilde Catholic Cemetery in Green Valley. Visitation will be 4 to 8 P.M. with a 4:00 P.M. Rosary and 7:30 P.M. prayer service Thursday at the Hamilton Funeral Home. Visitation will continue at the funeral home on Friday until 10:30 A.M. Walter Robert was born on October 3, 1922 to Camiel and Julienne (Strubbe) DeSaer in Marshall, Minnesota. He was baptized, received First Communion and confirmed at St. Clotilde’s Catholic Church in Green Valley. He entered the United States Navy on December 22, 1942 and served his country until his honorable discharge on April 4, 1946. On November 6, 1947, Walter was united in marriage to Gladys M. Paul at the Holy Redeemer Catholic Church in Marshall. He was a block layer, carpenter, owned a plastering business and was a workshop instructor at the Marshall DAC. Walter passed away at the Avera Morningside Heights Care Center in Marshall on Saturday, May 28, 2011. He had reached the age of 88 years, 7 months and 25 days. He is survived by his two daughters, Cheryl (Herm) Dybevik of Atwater, MN and Roberta (Dennis) Fox of Jacksonville, Fl; a son, Tim (Sue) DeSaer of Marshall; six grandchildren, Ryan (Sarah) Dybevik, Lori (Kelsey) Hytjan, Megan Fox, Kelly Fox, Andrew DeSaer and Sara DeSaer; a brother, Julius DeSaer of Marshall; a sister, Bernice Minnehan of Marshall; also many nieces, nephews and friends. He was preceded in death by his parents; wife, Gladys on April 19, 2008; two sisters, Annie VanHauwaert and Margaret VanMaldeghem; and two brothers, Jerome and Dennis DeSaer. Walter was a faithful member of the Holy Redeemer Catholic Church and the Knights of Columbus. He was also a member of the American Legion Post113, VFW Post 742 and a charter member of the Marshall Senior Woodworking Shop. Walt spent many hours tending to his raspberry bushes, to which his family and friends enjoyed the fruits of his labor. Memorials preferred to Holy Redeemer Church or The Grateful Family Program at Morningside Heights Care Center. Blessed Be The Memory Of Walter R. DeSaer.

The family of Walter Desaer created this Life Tributes page to make it easy to share your memories.

Send flowers to the Desaer family.